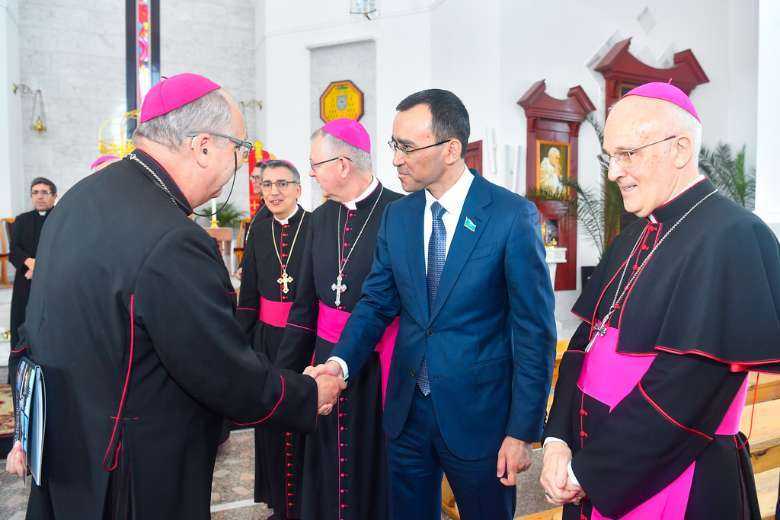 Kazakh Senate speaker Maulen Ashimbayev meets participants in the first plenary meeting of the Catholic Bishops’ Conference of Central Asia in Nur-Sultan. (Photo: Senate of the Parliament of Kazakhstan)

President Kassym-Jomart Tokayev of Kazakhstan has conveyed good wishes to the participants of the first plenary meeting of the newly created Catholic Bishops’ Conference of Central Asia (CBCCA) held in the national capital Nur-Sultan on April 27-29.

The president sent the Senate’s speaker Maulen Ashimbayev to the program to covey his message, reported the Press Service of Kazakh Senate.

While wishing participants a fruitful and successful meeting, President Tokayev noted that the meeting was held in the year of celebration of the 30th anniversary of the establishment of diplomatic relations between Kazakhstan and the Holy See.

Over the years the two sides have built a strong partnership based on shared values and aspirations, such as the protection of human dignity and the promotion of religious pluralism and global solidarity, he said.

He noted that Catholics and other believers have made significant contributions to the country and helped promote its image globally as a modern nation that sustains tolerance and mutual understanding between different religions and ethnic groups.

“Kazakhstan and the Vatican have considerable potential for further cooperation. I am confident that bilateral relations will be further strengthened through various educational, cultural, social and humanitarian initiatives and projects,” said Ashimbayev.

During a conversation with President Tokayev, Pope Francis confirmed his participation in the 7th World Congress of Leaders of World and Traditional Religions scheduled for Sept. 14-15 in Nur-Sultan

He quoted Pope John Paul II’s words during his 2001 visit to Kazakhstan about the common goal of being “peacemakers because a society firmly founded on peace is a society with a future.”

He termed the upcoming visit of Pope Francis to his country in September as a “historic and unique” event that confirms Kazakhstan’s status as a reliable platform for interreligious and inter-civilization dialogue.

During a conversation with President Tokayev, Pope Francis confirmed his participation in the 7th Congress of Leaders of World and Traditional Religions scheduled for Sept. 14-15 in Nur-Sultan.

The Vatican created the Catholic Bishops’ Conference of Central Asia in September last year to help the regional bishops respond to common challenges and to ensure mutual support to address problems in each country.

The first plenary of the conference that concluded on April 29 discussed pastoral priorities for local churches and discussed ways to prepare for the visit of Pope Francis. Catholic bishops and church officials from 10 countries attended the meeting.

The CBCCA was primarily comprised of Kazakhstan, Kyrgyzstan, Uzbekistan, Tajikistan and Turkmenistan. Afghanistan and Mongolia were added to the bloc later.

Kazakhstan is the largest among the five Central Asian nations. Most of the nation’s estimated 15 million citizens are Muslims, while Christians, mostly members of Orthodox Church, make up the largest religious minority. Catholics are estimated to be about 250,000 with most being of Polish, German and Lithuanian origins who moved to Kazakhstan following their deportation from the Soviet Union.