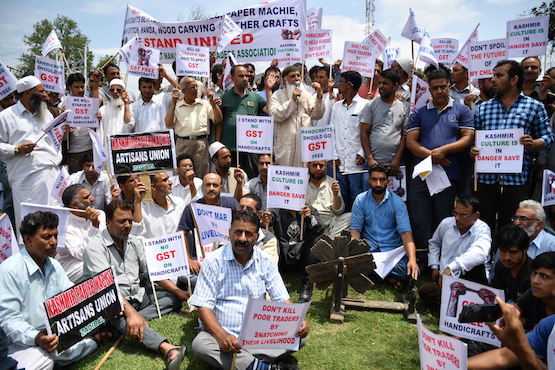 Artisans protest in the Jammu and Kashmir state capital Aug. 3 against implementation of Goods and Services Tax which they say would kill the already suffering Kashmir's handicraft industry. (Photo by Umar Asif)

Mohammad Yusuf Shah has been a worried man ever since a new tax regime was introduced across India in the middle of this year, including in his northern state of Jammu Kashmir.

Shah and generations of his family have weaved Kashmir's famed fine shawls, but that long tradition may not continue.

The shawls are known around the world for their fine embroidery and uniqueness of design.

But the weavers now face having to shut up shop due to a goods and services tax that came into effect on July 1.

Previously, they were exempted from tax.

A tax of 2 percent, 12 percent, 18 percent and 28 percent is now applied to all goods and services, with essential items taxed at the lowest rate and luxury items at the highest. However, chaos prevails as retailers were unsure which product came under which rate.

Post July 1, various raw and finished components are being taxed anywhere between 5 percent and 18 percent. A carpet seller displays a product for sale in Kashmir, known for its handmade carpets. (Photo by Umar Asif)

Critics of the new tax regime say there should be at least a temporarily exemption for the handcraft industry.

And the handicrafts industry suffered as a result of internal conflict for several decades involving Islamic militants seeking to break away from India and join Pakistan.

Craftsmen depend on tourists to buy their products, but the violence has scared many of them away.

Government records show that the state has some 507,000 small handicraft businesses that employ more than a million artisans making carpets, shawls and a wide ranger of other goods.

He said the social service wing of Jammu-Srinagar Diocese in the state runs an institute to train village women in skills such as paper dyeing and cushion making.

Ali Mohammad Dar, a 72-year-old man who has been supporting his family by weaving carpets for the past 50 years, says he feels trapped. "We have been living in poverty, but somehow managed," he said.

"Now, things are harder — the industry is dying."

Mustafa Ahmad, a papier-mache artist, says people have begun to refuse to buy his products because prices have increased as a result of the heavier tax burden.

According to research scholar Effat Yasmin from the Department of Economics at Kashmir University, many handicrafts were introduced to Kashmir during Muslim rule when craftsmen from Central Asia were hired to train local inhabitants in a wide range of skills.