A soldier stands guard on Sept. 2 on a deserted street in Kashmir, where a curfew has been in place since Aug. 5 after the federal government took away its autonomy and statehood. (Photo by Umar Asif)
Share this article :

Mohammad Shafi Dar, a farmer living in central Kashmir’s Ganderbal area, spends his entire day on his farm. Even though his small rice field doesn’t need any extra work now, Dar spends time staring at his crops to kill time.

Dar’s situation is no different from most Kashmiris. They have had nothing to do since Aug. 5 when authorities sealed roads, deployed troops on the streets, and cut communication lines to block phones and the internet.

India’s pro-Hindu government led by Prime Minister Narendra Modi imposed a curfew in the Muslim-majority area after amending the law to take away its autonomy and statehood. Many viewed it as pre-emptive move to check protests in the restive region.

“Just imagine a person living in a free world is all of a sudden not allowed to move out and not even use a phone to connect with his dear ones. I don’t even know if my ailing brother, who lives a few miles away, is dead or alive,” says 67-year-old Dar.

More than 4,000 people, including politicians of opposition groups, human rights activists and separatists, have been detained. 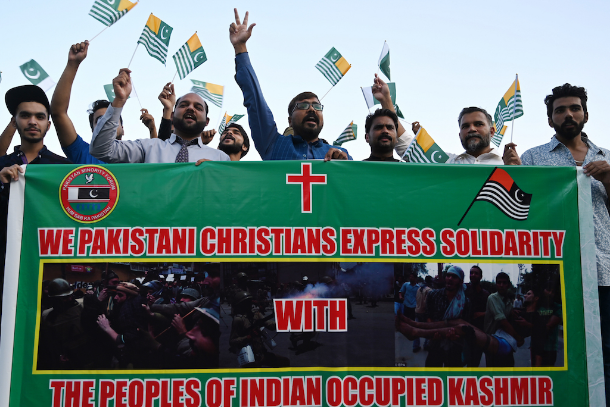 'Caged' Kashmiris ask: 'Where is the world?' Schools, universities, colleges and government offices are all shut. The government’s attempts to reopen schools have failed as parents are reluctant to send their children to school due to the wave of uncertainty.

Dar has developed a routine in the past month to fight his caged life.

“I wake up at dawn. Soon after my prayers, I go for a long walk into the nearby woods and on my return milk cows. An hour later, I go to my field and spend the entire day there,” he says.

“There is no work left to be done there because the season is over in April. The harvest is still two months away. I stare at the crops and take a few quick naps in the middle.”

People like Dar, who can enjoy rural “serenity and calmness,” are lucky, says Riyaz Ahmad, who lives in the old city of Srinagar.

“Here the air remains thick with the smoke of tear gas canisters and pepper gas” sprayed to disrupt anti-government protests, he says.

The 43-year-old government employee hasn’t moved out of the narrow alley where his house is situated since the clampdown began.

A father of two, Ahmad says he feels sorry for his children and the restrictions they face through no fault of their own.

“On normal days, they would hate going to school. But now they keep asking me when will their school bus arrive. We have no garden and no playground here and the kids really seem to have become frustrated. There is no internet, no phone and nowhere to go,” says Ahmad.

People in his area have developed a novel way of buying essentials amid the clampdown.

“We wake up in the middle of the night because there is no threat of protests and no troops on the roads at that time. We go to the house of a grocery shop owner and ask him to open his shop so that we can buy stuff like baby food, milk powder and cooking oil. Living in Kashmir has become a tricky affair,” says Ahmad, smiling.

Rashid Hassan, sitting next to Ahmad, says he hasn’t earned a single rupee as a daily wage laborer since the curfew began. He has ailing parents at his home and his family’s savings have begun to plummet as the strife intensifies with each passing day.

“I tried to move out for work a week ago but all I saw were deserted streets. I even went to the construction site where I was working the day before the clampdown, but nobody was there,” Hassan told ucanews.com.

The 29-year-old is delivering groceries in his area for about 200 rupees (US$3) a day so that he can at least feed his family.

Government employee Ishtiyaq Ahmad, who lives in uptown Srinagar, has started free classes to help children who haven’t been able to go to school. He and three friends teach 40 children aged 12-15 in his house.

He told ucanews.com that it helped children to study and kill boredom, but also helped teachers like him spend days fruitfully.

Meanwhile, the government claims that normalcy its returning to the region and that restrictions are being eased with each passing day.

Jammu and Kashmir governor Satya Pal Malik told a press conference on Aug. 29 that all efforts by the administration have been put in place to ensure peace prevails in Kashmir.

“Out of 111 police stations in Kashmir, curbs have been lifted by 81. More restrictions will be lifted in the days to come,” Malik said. “The government is making all arrangements so that students won’t suffer. I can assure you that normalcy is returning to Kashmir.”

Root of the crisis

The protracted Kashmir issue is linked to the partition of British India in 1947 when an independent India was formed by amalgamating Hindu-majority areas and Pakistan was created to accommodate Muslim-majority areas.

However, the Muslim-majority state of Kashmir, then governed by its Hindu king Hari Singh, favored joining India. But in order to retain the culture and traditions of Kashmir, Singh and India agreed to a series of concessions amounting to near-autonomy.

Since partition, Pakistan has claimed it should govern Kashmir entirely, resulting in three major wars and continuing border tensions between the arch-rivals, who now each control portions of Kashmir.

A three-decade insurgency aims to free the region from Indian rule. The armed rebellion and Indian efforts to quell it have claimed at least 100,000 lives, including those of civilians, militants and members of the security forces.

The border tensions and insurgency have killed an average of 1,500 people each year over the last 30 years, according to official records, compared with the annual average of 1,200 killed in the Israeli-Palestine conflict.