Kashmir looks for peace as government changes in Pakistan 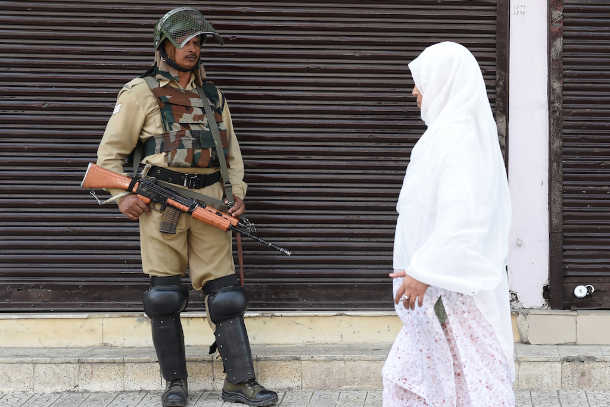 A Kashmiri woman walks past an Indian paramilitary trooper standing guard in front of closed shops on the second day of strikes called by Kashmiri separatists over attempts to change a residency law in Srinagar on Aug. 6. Jammu and Kashmir state has witnessed a decades-old conflict. (Photo by Tauseef Mustafa/AFP)

Leaders in India's only Muslim-majority state are pinning their hopes on Imran Khan, Pakistan's prime minister in waiting, to settle a decades-old conflict and bring peace to the region.

Peace prospects in Jammu and Kashmir improved after Pakistan Tehreek-e-Insaf led by the former cricket star emerged as the single largest party when results of national polls were declared on July 26.

Soon after the victory, Khan said his priorities would be to settle pending issues with India including the Kashmir conflict. Terming Kashmir as a core issue between the arch rivals, Khan said he "would be ready to take two steps if India takes one for friendship and peace."

Khurshid Alam, senior leader of the Jammu and Kashmir Peoples Democratic Party, said it is time for India to grab the opportunity to extend the hand of friendship toward Pakistan.

"If the two countries move forward, violence in Kashmir will naturally die down and people are hoping that a cordial relationship between India and Pakistan will end the Kashmir conflict forever," Alam told ucanews.com.

The conflict dates back to 1947 when India and Pakistan become separate states after British India was divided. Both countries claim Kashmir in full and have fought at least three wars and countless skirmishes over it.

India often accuses Pakistan of supporting a secessionist movement to free the region from India, an allegation Pakistan has consistently denied. At least 100,000 people have died in the past three decades after the insurgency intensified.

Calls to end violence and resume dialogue have come from leaders including church officials. Past talks have failed to find a lasting solution and recent efforts have been a non-starter because of the preconditions of both nations.

The United Jihad Council, a group of militant organizations, on July 30 issued a statement asking Khan to resolve the Kashmir issue in line with the wishes of the people.

Chief Syed Salahuddin also hailed Khan for his statement on Kashmir in his victory speech. He expressed hope that the new PM will intensify the campaign of highlighting the Kashmir issue at world forums and seek its resolution.

"Kashmiris are being oppressed and the world is watching as a mute spectator," he said.

Salahuddin said Pakistan is the main stakeholder in the Kashmir dispute and that the country under Khan's leadership will adopt a robust policy on political and diplomatic fronts to find a justifiable solution.

Even pro-India political parties in Kashmir are hoping that the former cricketer will improve relations between the countries.

Kashmir's former chief minister Mehbooba Mufti on July 31 took to Twitter to welcome the telephone conversation between Indian Prime Minister Narendra Modi and Khan. Modi had congratulated Khan on his victory. "Hope this goes beyond the optics and leads to a sustainable thaw between India and Pakistan," Mufti wrote.

However, Javaid Ahmad, a political commentator and editor of an Urdu tabloid newspaper, sees little chance for peace.

"People in no way should expect miracles to happen. Governments keep changing in both countries but the issue of Kashmir continues to remain unattended since 1947," he said.

Ahmad said both India and Pakistan used Kashmir as a poll plank during the election campaign. "No miracles cam be expected in Kashmir unless there is seriousness and the two countries rise above the political rhetoric," he told ucanews.com.