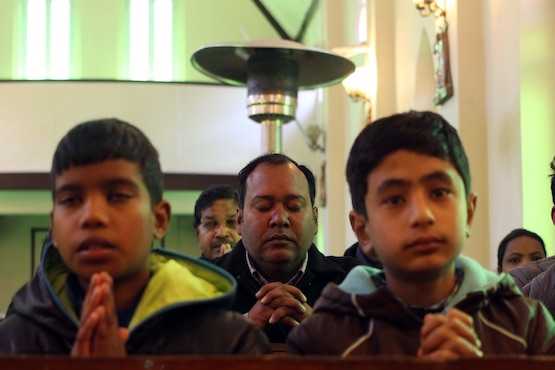 Christians pray at the Holy Family Catholic Church in Srinagar March 12 following Pope Francis' appeal to pray for those suffering because of their faith. (Photo by Umar Shah)

Catholics in India's conflict-torn Jammu and Kashmir state prayed for Christians persecuted for their faith and an end to violence the world over following an  appeal from Pope Francis.

Some 300 Catholics from the the 129-year-old Holy Family Catholic Church in the state capital of Srinagar March 12 prayed for peace. The parish is the largest and most prominent in the state where Catholics form a microscopic minority in India's only Muslim-majority state.

They were responding to Pope Francis' prayer intention for March to support persecuted Christians.

"They are persecuted and killed because they are Christians.... Do it with me, that they may be supported by the prayers and material help of all the churches and communities," the pope said.

Prem Kumar, a Catholic said he was inspired by the Holy Father. "We read about how Christians are persecuted in Somalia, Afghanistan and North Korea. We have seen how some were beheaded and their homes destroyed. Extremism of any sort is dangerous," he said.

According to a recent report published by the non-profit ministry Open Doors, about 90,000 Christians were killed for their faith worldwide in 2016. More than 200,000 experienced religiously motivated violence or persecution.

An earlier report by the Center for Studies on New Religions also estimated 90,000 Christians were murdered for faith. Study author Massimo Introvigne called Christians "the most persecuted religious group in the world."

Lila Richards, who attended the prayer service, said Christians in Kashmir have always been concerned about the rise of intolerance. "We have seen both Muslims and Christians oppressed for their faith. We prayed for this mayhem to end," she said.

Father Roy Mathew, parish priest of Holy Family Catholic Church told ucanews.com they prayed "not only for Christians but for people of all religions who are being targeted because of their faith."

"It is incorrigible to witness innocents being massacred, tortured and raped due to their religion. Humanity should come first," the priest said.

Jammu and Kashmir state has witnessed much violence in the last 30 years, were an estimated 100,000 people have died, including civilians, militants and army personnel, after groups began an armed struggle for freedom from Indian rule.

At least 90 civilians were killed and over 15,000 injured during a five-month uprising that began July 8, 2016. More than 12,000 were arrested and detained as Indian forces worked against the rebellion.

Rahul De Souza, a parishioner and university student said misinterpreting religion for political gains results in violence. No religion teaches violence but "it is painful to see terror organizations like the so-called Islamic State is publishing the names of churches on internet and calling for its adherents to attack," De Souza said.

Some 60 percent of the state's 12.5 million people are Muslims and Hindus form 30 percent, making it India's only Muslim-majority state. Christians constitute some 35,000, half of them estimated to be Catholics.