After road construction brings clashes between Myanmar's military and the KLNA, a lasting ceasefire seems out of sight 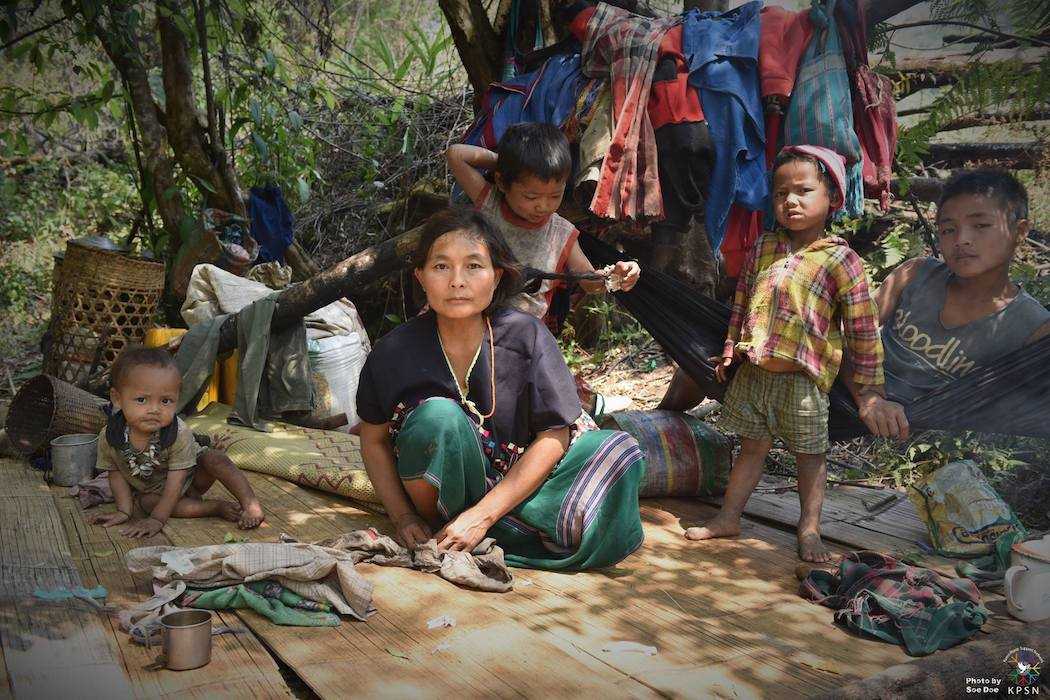 A displaced ethnic Karen family are seen in the jungle in Hpa-pun township of Kayin State in March. (Photo by Soe Doe/KPSN)

On March 4, villagers in Hpa-pun township in Myanmar's Kayin State fled their homes in the dead of night when government soldiers suddenly appeared.

Ten days later, the military took trucks and bulldozers to the area, which was under the control of the Karen National Liberation Army (KNLA), to expand an old road.

The deployment of six battalions for security reasons near the road construction prompted 53 clashes between the military and the KNLA. More than 2,400 people including elderly, women and children fled into the jungle.

The Karen National Union (KNU) and the KNLA called on Myanmar's military to halt road construction as it breached points in the nationwide ceasefire agreement that forbid military offensives, expansion of military infrastructure and troop reinforcements in ceasefire areas.

On May 17, military chief Min Aung Hlaing had a meeting with KNU and KNLA officials in Yangon and agreed to a temporary halt to construction and to withdraw troops from the area.

Although the military said the development would help people, civil society groups said the road would pass through communities and be used for connecting military bases.

Saw Doe Doh, a spokesman for the Karen Peace Support Network (KPSN), said women and children remain in the jungle while others have returned to their homes following the withdrawal of troops.

He said people were still observing the situation. "We can't fully trust the temporary halting of road construction and it raised a question of whether they stopped due to the coming monsoon season and will restart later," Doe Doh told ucanews.com.

The military's move was in breach of the ceasefire agreement and undermined trust from ethnic groups, he said. "They need to show their commitment to peace," he added.

In April, the KPSN released a report, "The nightmare returns: Karen hopes for peace and stability dashed," that documents human rights violations and military reinforcements in KNU territory.

The report said the 2,400 Hpa-pun villagers who fled into the jungle were former displaced persons. The region has seen widespread armed conflict and forced relocations in 1992-93, 1995-97 and 2005-08. An ethnic Karen representative talks with a Myanmar general during the first Panglong Peace Conference in Naypyidaw in August 2016. (ucanews.com photo)

Renewed fighting in March raised concerns about the commitment of Myanmar's military to genuine peace as Kayin State has been relatively calm since the signing of a bilateral ceasefire in 2012.

Bishop Justin Saw Min Thide of Hpa-an said he was concerned about the prospects for peace.

"Fighting will not lead to a proper solution and the refugees who remain along Thailand's border are an obvious example of the results of decades-long civil war," he told ucanews.com.

"Whenever I talk with people from local communities, they say they don't want to see clashes anymore as they are longing for peace," he told ucanews.com.

The KNU has been fighting for autonomy since Myanmar won independence from Britain in 1948. More than 60 years of civil war between the KNU and Myanmar's military have left over 100,000 Karen refugees in camps along the Thai border.

The KNU is among eight armed groups that signed the nationwide ceasefire agreement in October 2015 and the most active and trusted group with Myanmar's military. It sometimes faces harsh criticism from Karen civil society organizations.

"What we understand is that the military has agreed to halt road construction and we will continue to discuss it in the meantime," he told ucanews.com.

Htoo Win said it understandable to develop roads after a ceasefire but it is not the right time to do it.

Apart from military clashes with KNLA troops in Kayin State, fighting continues in Kachin, Shan and Rakhine states. Fighting is severe in the north as the military has stepped up its offensive with fighter jets and heavy artillery against the Kachin Independence Army.

The military is viewed as being beyond the control of Aung San Suu Kyi's government.

A key reason is that the military remains a dominant force in Myanmar's transition to democracy, with 25 percent of unelected military representatives being allocated by a 2008 constitution to every parliament in the nation. The military also controls the key ministries of defense, border and home affairs.

The latest round of the Suu Kyi-initiated 21st Century Panglong Peace Conference, held in August 2016 and May 2017, was supposed to be held in January 2018 but has been postponed to the end of June.

Saw Kyaw Swar, an ethnic Karen and KPSN member from Hpa-an, said the military has expanded its bases in the state under the pretext of the national ceasefire agreement.

"We don't trust the military to halt the road construction completely. We are concerned they will continue to do it by taking the opportunity of conflicts," said Kyaw Swar.