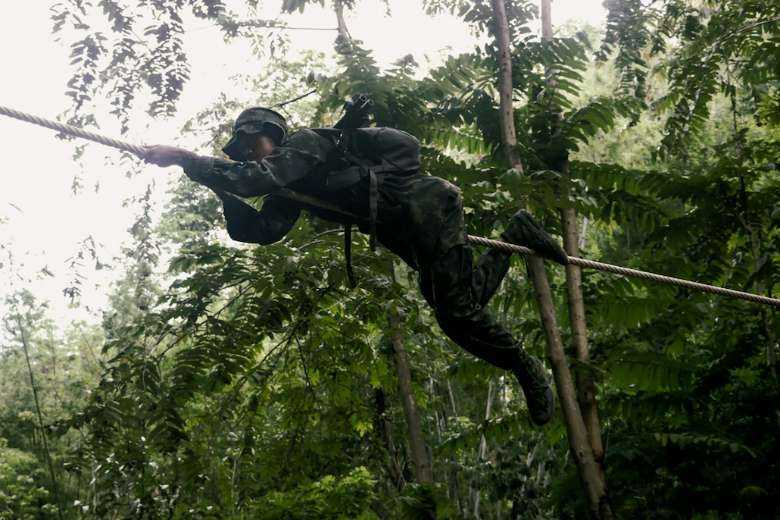 An anti-coup activist undergoes basic military training at the camp of the Karen National Union (KNU), an ethnic armed group in Myanmar's Karen state, in May. (Photo: AFP)

Two senior commanders from an ethnic Karen armed group have admitted that soldiers under their command detained and killed 25 men in June.

General Ner Dah Bo Mya and Lieutenant Saw Ba Wah of the Karen National Defense Organization (KNDO) confessed to Fortify Rights that their soldiers were responsible for the massacre.

Ner Dah Bo Mya denied any wrongdoing and claimed the victims were Myanmar army “spies,” adding that his soldiers “had to finish them up, otherwise they try to run away during the fighting and then they would come back, and it would be very bad for us.”

The order to kill the men came from a “captain of intelligence” at the Karen National Union (KNU), the political group that controls the KNDO, according to the rights group.

On June 1, the group killed 25 men among the detainees and released the rest between June 1-9.

The KNU is setting an important example in transparency, cooperation and commitment to share evidence of atrocities with international justice mechanisms

Senior KNU leaders told Fortify Rights that they would cooperate with international investigators and share evidence related to the massacre and other crimes, including the Myanmar military’s atrocities.

The killings came to light when junta-controlled state media published pictures in June showing what it said were the bodies of 25 construction workers massacred by the KNDO in Karen state.

The KNU said it will form an investigation team to probe the massacre.

“This was a massacre and it should be investigated and prosecuted,” Matthew Smith, chief executive at Fortify Rights, said in an Aug. 17 statement.

“The KNU is setting an important example in transparency, cooperation and commitment to share evidence of atrocities with international justice mechanisms.”

The KNU has engaged in sporadic clashes with the Myanmar military in Karen state and along the Thailand border since the Feb. 1 coup.

The mountainous region in southeast Myanmar has some 1.5 million people, mostly ethnic Karen, also known as Kayin. Government records show that 9.5 percent or 142,000 are Christians.

More than 100,000 people in Karen state have been forced to flee their homes since March when Karen fighters seized a military post and the army retaliated with air strikes, the first in more than 20 years in the region.

The military’s brutal crackdown against protesters and civilians continues unabated and at least 1,000 people including children have been killed since Feb. 1.

The United Kingdom has called for an immediate pause to conflict in Myanmar to allow vaccinations as Covid-19 ravages the country.

Britain’s deputy UN ambassador James Kariuki told reporters after a closed Security Council meeting on Aug. 17 that “the UK also called for medical and humanitarian staff to work without fear of attack.”

He said UN officials will work with Security Council members, other UN members and international partners such as the Global Alliance for Vaccines and Immunization to ensure the people of Myanmar get access to vaccines in an equitable way regardless of politics, ethnicity or religion.

“Vaccines must be tools of protection, not politics,” Kariuki stressed.