Catholic politician Je Yaw Wu shows a report about illegal logging in Kachin State. The upper house lawmaker for the state is against any restart of the controversial Myitsone Dam project. (Photo by John Zaw)

For Myanmar's new civilian government, the controversial Chinese-invested Myitsone Dam project in Kachin State is a serious test in its ability to balance its relationship with China versus local concerns.

Chinese Foreign Minister Wang reportedly said on March 8 that Beijing is trying to resolve the stalled dam project and it had confidence in the new government of Myanmar in dealing with the matter.

Around 90 percent of the electricity that the dam was set to produce was going to be used by China, which borders conflict-stricken Kachin State.

The clock is now ticking for the incoming National League for Democracy-led government to answer the Chinese. The military-backed government and President Thein Sein's term will end on March 31 and a new president, Htin Kyaw takes office on April 1.

President Thein Sein angered China when he suspended construction of the US$3.8 billion dam on Sept. 30, 2011 citing public outcry over the project's impact on the environment and local communities on the Irrawaddy River.

The year prior, dam construction resulted in at least 2,000 people being moved from their homes in Aung Myin Thar village.

Prior to Myanmar's elections in November, National League for Democracy party's Aung San Suu Kyi toured Kachin State and met with Christian leaders. The Nobel laureate told them she would try to address the dam project but made no promises.

The dam remains highly unpopular among people in the state who are predominantly Christian. 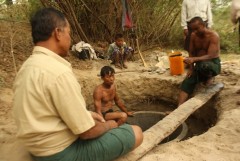 Cardinal Bo: 'Myanmar stands on the threshold of hope'

Kachins protest for the complete halt of the China-backed Myitsone Dam in Kachin State. The protest was held on International Rivers Day, March 7. (Photo supplied by the Kachin Development Networking Group)

Je Yaw Wu, a Catholic and Upper House lawmaker for the National Unity Party in Kachin State, strongly opposes any restart of the dam's construction.

"We are ready to fight if the new government allows the project to resume," said Je Yaw Wu who is from the ethnic Lisu tribe. "The issue is not only the concern of local Kachins but all people of Myanmar as the Irrawaddy River is the mother of us all," he said.

"The National League for Democracy has vowed that it is the people's party so they should listen to the voices of the people. A people's government should not carry out against the will of the public."

The 47-year-old ex-priest turned politician spent his childhood at the confluence of Mali and N'Mai rivers, where the dam construction is being built.

Je Yaw Wu played a leading role in the previous parliament over the suspension of the dam's construction. As part of that, he submitted a report to government about its cultural and environmental impacts, which contributed to President Thein Sein suspending construction.

He reiterated that the area's biodiversity and local cultures would be at risk if the project went ahead. The lawmaker also feared that the region's natural resources would be exploited by China.

"The suspension of the dam project needs to be permanent as it is also related with our sovereignty," said Je Yaw Wu.

Another lawmaker, Peter Lama Naw Aung has also raised concerns about the dam's impact on the local community if it resumed.

"The government needs to pay attention to the will of the people. I will raise my opposition in parliament if there are any efforts to restart the dam," said Lama Naw Aung, a Catholic and lower house lawmaker from the Kachin State Democracy Party.