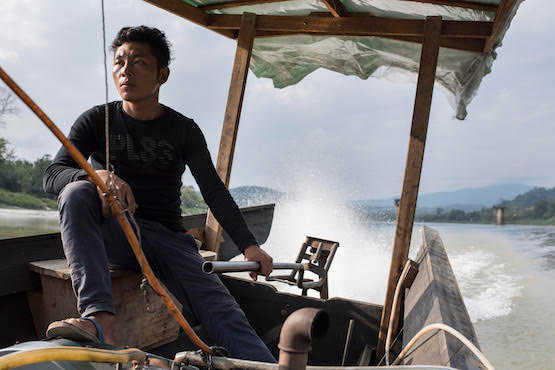 Catholic ethnic Kachin Naw Ra piloting his boat down the Irrawaddy River with the first pylons for the Myitsone Dam in the background. (Photo by Cory Wright)

Local Catholic leaders in Kachin State are cautiously optimistic over the prospect of a deal between the Myanmar government and Beijing over controversial China-built Myitsone Dam.

Reports have indicated that the first state visit by Myanmar President Htin Kyaw to Beijing would involve discussions about the cancellation of the project in exchange for port-based opportunities for China on the country's coast or additional jade mining concessions.

Work on the US$3.6 billion project commenced in 2008 but the military-backed government of President Thein Sein suspended its construction in September 2011 following protests and widespread environmental and human displacement concerns. The issue became a major thorn in relations between the two sides as China vigorously agitated for recommencing work.

As Htin Kyaw commenced a six-day visit to China on April 6, Bishop Francis Daw Tang of Myitkyina Diocese in Kachin State predicted the dam issue would be tabled.

"But I think China is more interested in the deep-sea port project in Kyaukphu in western Myanmar rather than the Myitsone Dam project," Bishop Tang told ucanews.com.

China has been eying the deep-sea port of Kyauk Phyu in the Bay of Bengal for some time. It is a key entry point for the Chinese gas and oil pipeline to Yunnan expected to start pumping in May.

Yan Myo Thein, a Yangon-based political analyst, said the Myitsone Dam could be on the agenda of Htin Kyaw's visit along with other development projects but a final decision would be unlikely.

He said the final decision would most likely come during the One Belt, One Road Summit in Beijing in May. One Belt, One Road is a myriad of infrastructure projects designed to connect China with the Middle East, Russia and other parts of Europe.

"In terms of China-backed development projects in Myanmar there really needs to be transparency and the government and parliament need to move into line with international standards and accountability," Yan Myo Thein told ucanews.com.

The dam remains deeply unpopular among the Kachin people, who are predominantly Christian, as up to 100 villages will be plunged underwater if the project goes ahead near the culturally significant confluence of the rivers. Myitsone means "rivers meet" in Burmese.

Bernadette Ja Hkawng from Tangphre village, a Catholic, who was forced to move to Aung Myin Thar, a freshly built relocation village in 2010, said she is watching Htin Kyaw's visit to China and waiting to see if there is any result.

"We hope that the government of Myanmar will listen to the voices of people," Ja Hkawng said.

The hydro-electric dam would be the 15th largest in the world; it's 6,000 megawatts of electricity is more than Myanmar's entire power grid produces at present. However, the majority would be used by China despite Myanmar being chronically short of electricity.

Much rests on the shoulders of Aung San Suu Kyi who campaigned against the dam and will attend the One Belt, One Road summit. In August 2016, she formed a 20-member commission to review the social and environmental impacts and their report is expected this year.