Suspected Islamic terrorists killed 10 Catholics and wounded over 30 on June 3, 2001 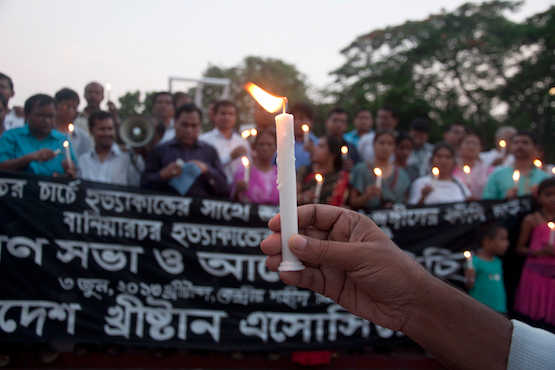 Protesters call for justice for a deadly 2001 bomb attack on a Catholic Church in this June 3, 2013 file photo. (ucanews.com photo by Stephan Uttom)

The date June 3 reminds Amrito Sikder of one of the most tragic and heartbreaking events of his life.

On that day in 2001, Sikder lost his younger brother Monmoth in a bomb attack at a Catholic Church about 200 kilometers south of Bangladesh's capital Dhaka.

Monmoth, who was 21 at the time, was among 10 churchgoers killed by the explosion that also seriously wounded over 30 other Catholics attending Sunday Mass.

The blast struck the choir area of the Most Holy Redeemer Church where mostly young people were sitting.

Suspected Islamic militants were believed to be behind the attack.

Sikder, who was then a college student, says the attack came as a critical blow to their four-member family.

"My brother didn't continue education after high school, but he was involved in farming and he was the only one in our family who then earned an income," says Sikder, 38, who is now a schoolteacher.

"With his death, uncertainty and misery hit our family like a black shadow," he says.

"It took great pains for me to complete my education. Now, I'm trying to help my family, but our family have yet to recover from what happened," he explains.

The loss of a son was such a heavy blow for their mother that she became mentally ill and remains that way today, Sikder says.

"That is another tragedy for our family," he says.

The ordeals faced by the Sikder family are similar to what the families of other victims from the bombing have had to endure.

Except for some emergency aid, there has been no compensation from the government for the families over the past 15 years.

The 2001 blast came during a surge in Islamic militancy in Bangladesh. The Harkat-ul-Jihad and another militant group Jamaatul Mujahedin Bangladesh targeted and carried out a bombing campaign in that year, which targeted cultural programs, political rallies and the country's judiciary.

Frustratingly for the families, there has also been little progress in delivering justice for the atrocity, which remains the deadliest attack on Bangladesh's minority Christian community. Christians account for less than half a percent of the country's 160 million plus people.

According to reports from local media, Harkat-ul-Jihad chief mufti, Abdul Hannan, confessed during police interrogation that he masterminded the church bombing.

But police deny that the Harkat-ul-Jihad leader made any such admission.

A controversial government-backed inquiry committee concluded in a report that an internal feud within the local Christian community was behind the blast.

Local media refuted the report, Christians protested against it across the country and a new probe begun with police conducting investigations.

Italian missionary and parish priest Father Mimmo Pietanza from the Society of St. Francis Xavier for Foreign Missions and a local Catholic filed two cases with local police against the unnamed attackers over murder and explosives charges.

These cases were handed over to the Criminal Investigation Department, a special police branch, in the same year.

Since then 15 investigating officers have been put in charge of the cases, but a formal charge sheet, which must be submitted to the court to begin legal proceedings, has yet to be presented.

Police have arrested 38 suspected militants over the two cases, but none of them confessed their involvement in the bombing, according to the current investigating officer, Shoeb Ahmed.

"This is a big, serious case, so it's taking a long time," says Ahmed.

A major issue behind delay is the changing of officers by rotation, he says.

"Once a new officer takes charge of the case, he needs to start from the beginning and scrutinize things once again," he says.

"We are wholeheartedly trying to figure out who was behind it. As no one has confessed to the crime yet, we can't say when we can formally press charges." Christians, Muslims and Hindus at a rally in June 3, 2013 that called for justice over the 2001 bombing of a Catholic Church. (ucanews.com photo by Stephan Uttom)

Father Peitanza, who is the current diocesan procurator at Khulna Diocese, expresses dismay over the police dillydallying.

"Police keep saying that they are working to crack the case, but we ask how long will it take. I have tried several times to speed up the case, but it failed to do so," says Father Peitanza.

"At present, I am not making a strong effort to press for justice as I have become tired doing so. Like most families of the victims, I am also losing hope for justice," he says.

Other Christian leaders and church officials express frustration with the case's lack of progress.

"Over the years, we have held protest rallies and lobbied government officials for justice and compensation, but we have not seen any progress. It seems the case is not a priority for the authorities," says Nirmol Rozario, secretary of the Bangladesh Christian Association.

"The most pathetic issue is how the families of the victims have led miserable lives ever since, but the government has not offered them any compensation or aid. This is saddening and frustrating," Rozario adds.

A government official in Gopalganj says the authorities distributed some emergency aid to the victims through the church after the attack.

"As far as I know the district administration offered help to families of the victims after the bombing through the local church," says Chowdhury Emdadul Huq, administrator of Gopalganj District Council.

Huq admits that more could be done for those families, and this responsibility falls on the office of the deputy commissioner, the chief government officer in the district.

Khalilur Rahman, current deputy commissioner of Gopalganj was not available for comment.

The local church has been providing cash and daily essentials to seven families of the victims, says Lucas Howlader, a catechist working in area

"These families are very poor. So, the church is trying to help them survive with some aid on a monthly basis," says Howlader.

Catholic parents Sukhranjan and Anna Halder lost their only son Sumon, 24, in the blast.

Sumon was the sole breadwinner for the family and he married just five months before the bomb attack.

Sukhranjan, 72, a farmer, suffers multiple ailments including rheumatic pains and diabetes, while his wife Anna, 61, is an asthma sufferer who also has a mental illness.

Unable to work and feed themselves, they survive on donations.

"We don't expect anything, because nothing can fill the great loss we suffered," Sukhranjan says.

"I have some land, but I can't cultivate it as I am weak. We rely on the generosity of the church and relatives," he says.

But justice is all he wants.

"We would like to see justice delivered and the culprits punished. This is the last wish we would like to have fulfilled before we breathe our last," he adds.