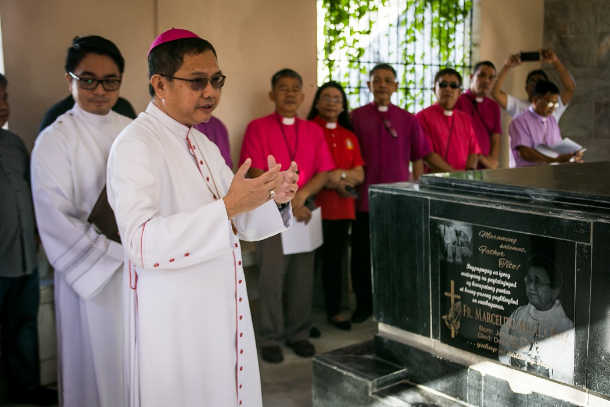 Bishop Roberto Mallari of San Jose leads the observance of the first death anniversary of Father Marcelito Paez on Dec. 3. Father Paez was gunned down on Dec. 4, 2017, by unknown assailants. (Photo by Mark Saludes)

Justice remains elusive a year after the killing of Catholic priest Marcelito Paez on Dec. 4, 2017, in the northern Philippine Diocese of San Jose, Nueva Ecija province.

On the first anniversary of the killing, local church leaders from various religious denominations paid tribute to the priest.

"There is no development in the case," Bishop Roberto Mallari of San Jose Mallari told ucanews.com. Authorities have vowed to continue with the investigation, he added.

Gunmen killed the 72-year-old Father Paez while he was driving in San Leonardo, a town about 176 kilometers northeast of the capital Manila.

The slain priest of San Jose Diocese was a national board member of the Rural Missionaries of the Philippines, an intercongregational organization of priests and laypeople that works with farmers and tribal people.

Father Paez was known as an activist. A former parish priest, he once led an alliance that campaigned for the removal of U.S. military bases.

On the day he was killed, the priest had helped negotiate the release of an organizer of a farmers' group arrested by the military.

"As we remember him as a good and valiant priest who served the poor until his death, we call for justice," said Bishop Mallari.

The prelate said that before the priest died he had gathered church groups "to stand in unity against all forms of killings" in the country.

Bishop Felixberto Calang of the Ecumenical Bishops Forum remembered the work of Father Paez with the poor.

The Philippine Independent Church prelate said the priest was "a peace advocate who placed the welfare of the masses at the forefront of his work."

Father Paez was the first of three Catholic priests to be murdered in the Philippines during a six month period over the last year.

Fathers Mark Ventura and Richmond Nilo were also killed by gunmen on April 29 and June 10 of this year, respectively.