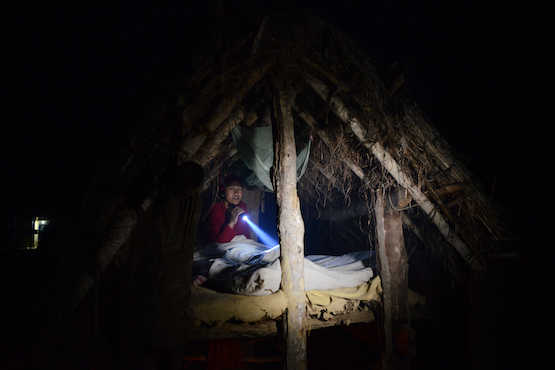 A Nepalese woman prepares to sleep in a secluded hut during her menstruation period in Surkhet district. The practice of banning women from the home when they are menstruating has been outlawed in Nepal. (Photo by Prakash Mathema/AFP)

Saraswati Rawal was 14-years-old when she had her first menstrual period in a remote village of western Nepal.

Dark local superstitions made her fearful and anxious.

She faced a deep-rooted practice called 'Chaupadi' that discriminates against menstruating women and girls.

"I was terrified," Rawal now recalls, 17 years after the trauma of that time.

"I knew that if I told my parents about my period, they would banish me to a shed outside the home, considering me untouchable and impure," she said.

It was six months after her first period that she informed her mother that she had begun to menstruate. As a result, she was sent to the same hut used by her mother for monthly seclusion.

Rawal said menstruating girls in her remote Accham district were isolated for nine days during their first period and for seven days each month after that.

"The nine days inside the dark room with poor ventilation felt more like like nine years," Rawal, now aged 31, said.

At least nine women have reportedly died since 2007 in Accham district from Chaupadi-related causes, including smoke inhalation after lighting fires in severely cold conditions. Other deaths have been linked to snakebites. There is also a risk of contracting serious diseases from insects, especially for women and girls banished to dung-strewn cowsheds.

The practice forbids menstruating females from entering kitchens or Hindu temples and they are not allowed to touch taps or livestock. Superstitious villagers believe that breaking such taboos would bring illness and family misfortune, even natural disasters.

Rawal, newly elected chairperson of Ramaroshan rural municipality in Accham, has spent years fighting to eliminate the practice of Chaupadi in her area.

A 2010 report found that 19 percent of Nepalese women observed Chaupadi, but the percentage can be much higher in outlying areas.

There has been growing national and international community concern about the pressing of women and girls into menstrual isolation.

The Supreme Court of Nepal in 2007 ruled against centuries-old Chaupadi. However, it was not until earlier this month that the Nepalese Government enacted a new law criminalizing it.

The new law will not come into effect for another year. Then anyone convicted of forcing females to follow the custom faces imprisonment for up to three months or a fine of 3,000 rupees (US$29) or both.

"This is a positive step towards our fight to make people realize that menstruation is not a crime or something that needs promotion as an important religious belief," Rawal said.

More needed to be done, she added.

Another church group associated with the Sisters of Charity of Nazareth has been directly working in West Nepal to improve the health of women and children.

"It is important to make people understand that menstruation is a natural cycle and not a sin," she said.

Radha Poudel, a human rights' activist, while welcoming the legal prohibition, said laws in themselves were not enough to change prevalent mind-sets in patriarchal communities.

Many Hindus living in urban areas also practiced various forms of discrimination against menstruation, but not to the extreme of Chaupadi in rural areas.

"It is still a big deal among educated families to consider menstruation as a natural process," she said.

"The restrictions in movement, entering certain rooms within the house and eating separately in one corner, is definitely causing physical and mental trauma to young girls."

Girls and women in all parts of Nepal should be allowed to live a dignified life, she added.