Bombay High Court has expressed “great respect” for the work done by Indian Jesuit priest Stan Swamy, who died in custody on July 5.

The 84-year-old, who suffered from Parkinson’s disease, hearing impairment and other age-related ailments, never recovered from the hardships of being confined in a jail without basic services.

Justice S.S. Shinde and Justice N.J. Jamadar of the top court in the western state of Maharashtra were hearing the late priest’s bail appeal posthumously on July 19.

“We don’t have time normally, but I saw the funeral service [of Father Swamy]. It was very gracious,” Justice Shinde said.

“He is such a wonderful person. The kind of service he has rendered to the society. We have great respect for his work. Legally, whatever is there against him is a different matter.”

The judges also tried to counter criticism of the judicial system and the National Investigation Agency (NIA), a federal anti-terror body that arrested Father Swamy, for repeatedly denying the priest’s bail applications on medical grounds.

What was in our minds, we can’t say now as we couldn’t pronounce our order

“You came to us with his medical bail plea on May 28 and we acceded to every prayer, every time,” the court said to Swamy’s lawyer Mihir Desai.

“Outside, we are speechless. Only you [Desai] can clarify this. You have said it on record that you have no grievance with this court in the matter.”

Referring to the pending bail plea of the late priest, the court said: “What was in our minds, we can’t say now as we couldn’t pronounce our order.” 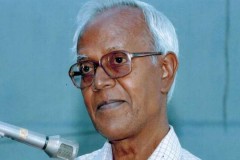 The high court posted the case of Father Swamy’s death for July 23 and is expected to pronounce its verdict after ascertaining the veracity of claims by his lawyers. It also directed the NIA to file an affidavit if it has anything to place on record in the case.

The priest was jailed in October last year after being arrested at his home in Ranchi, the capital of Jharkhand state in eastern India. Along with 15 others arrested in the Bhima Koregaon case, he was accused of collaborating with outlawed Maoists and trying to destabilize the Indian state.

Father Swamy repeatedly denied all charges but was lodged in Taloja Central Jail in Mumbai city, the capital of Maharashtra. He twice applied for bail in the special NIA court, but to no avail. He then approached Bombay High Court.

He was admitted to the Catholic-managed Holy Family Hospital in Mumbai on the high court’s order only on May 28 but tested positive for Covid-19 a day after. His health continued to deteriorate.

We are glad that the high court has appreciated Father Swamy

Some church leaders say a lack of basic facilities in jail must have prevented him from having proper food and drink for more than six months. He required assistance from fellow inmates to perform even daily chores.

“We are glad that the high court has appreciated Father Swamy,” said Father A. Santhanam, who fought a lengthy legal battle to ensure medical care for the ailing priest and is now monitoring the court proceedings.

Father Santhanam told UCA News that “during the hearing [on July 19] the court has also given enough indication that it will not appreciate prolonged incarceration of [people] under trials.”

The court expressed its regret over how, in several cases, those arrested languished in prisons waiting for legal trials to begin, he said.