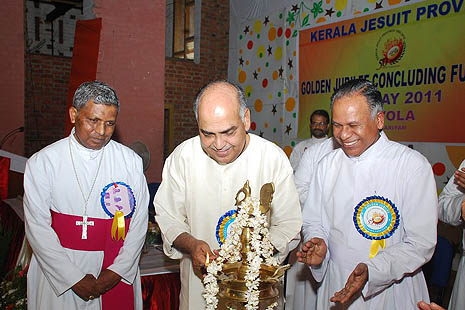 A Supreme Court judge has urged Jesuits to take the lead in fighting social evils and rampant corruption in the country. “We are living in a society where social evils and corruption have become the order of the day. Jesuits should play a new role in fighting them,” Justice Cyriac Joseph told a gathering at golden jubilee celebrations for Kerala Jesuit province. Justice Joseph, the product of a Jesuit education, noted that the Society of Jesus always provides a modern and revolutionary face of the Church with its commitment to social action. “We have to fight corruption and Jesuits can play an effective role in creating awareness against social evils,” he added. He was speaking at a gathering marking the end of year-long jubilee celebrations at the Loyola College auditorium in Sreekaryam, near Thiruvananthapuram, the Kerala state capital. He lauded Jesuit contributions to youth formation and for providing quality education to the poor. “I am a beneficiary of Jesuit formation,” Justice Joseph said, recalling his association with Jesuit initiatives such as the All India Catholic University Federation and New Man Association. “In fact, Jesuit priests guided me and influenced me in my faith formation. Thousands of people have benefited from the Jesuits’ vision and mission for the Church,” he added. Archbishop Maria Calist Soosapakiam of Trivandrum, who presided over the gathering, thanked the Jesuits for establishing educational institutions in coastal areas and conducting studies to identify basic problems in Kerala’s poorer areas. Jesuits have helped Kerala’s fishing communities to advance socially, educationally and spiritually, he said. The meeting was followed by a cultural performance by students from Jesuit institutions. IC14245