Journalists have an obligation in speaking up for the voiceless, say media persons 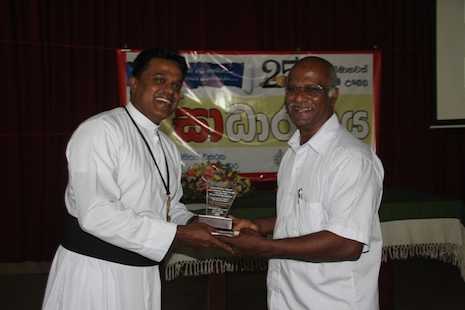 Sanath Fernando (right), editor of Sadaranaya receives an award Oct. 3 in Colombo for his service in empowering readers. The magazine is produced by the Oblate-run Center for Society and Religion and is celebrating its 25th anniversary. (Photo by Niranjani Roland)

Journalists in Sri Lanka  have a moral obligation in fair reporting, speaking up for the voiceless and in empowering its readers, said media professionals during a function organized by the Oblate-run Center for Society and Religion.

"Media organizations and journalists have a moral obligation when reporting for the voiceless and also follow a code of ethics," said K.W. Janaranjana, chief editor of the Ravaya, a Sinhala-language weekly.

Janaranjana was joined by others speaking Oct. 3 in Colombo at the 25th anniversary celebrations of "Sadaranaya" (justice) magazine produced by the Center for Society and Religion.

The center was founded by the late Oblate Father Tissa Balasuriya, a theologian and social activist who Pope John Paul II excommunicated in 1997 for promoting a greater role for women in the Church. After intense international publicity and negotiations, the excommunication was lifted in 1998.

"As a media person, I am shamed at our local media by their recent reports and their irresponsible manner (in reporting news)," Janaranjana said.

Media should play a role in bringing peace and reconciliation among people and give their voice for social justice "but today it is very rare to see these qualities in the media as an organization or an individual," he said.

Sri Lanka media in recent times has been criticized for allowing business or political interest to interfere with independent journalism and for news either being concealed from the public or deliberately exaggerated by vested interests.

Shantha Mahindapala, 58, editor of Sadaranaya from 1998 to 2006, recalled how he faced many problems during the decades-long civil war between the Sinhalese government and the ethnic-minority Tamils when the magazine "raised our voice on behalf of the people."

For this "many politicians labeled the magazine as extremist and against the government and the Criminal Investigation Department questioned me and raided the center too," he said. "But we never drew back in the role of social responsibility."

Oblate Father Ashok Stephen, director of Center for Society and Religion said "many in mainstream media (today) have failed to raise some social issues or are afraid to talk.”

Sanath Fernando, present editor of the magazine, said Sadaranaya will continue to seek to empower readers to question when their rights have been violated.