Journalists are fearful in new Myanmar Detained Myanmar journalist Nayi Min leaves after a court pre-trial hearing in Yangon on Oct. 17, 2018. Rights groups criticized his and the detention of two other journalists from Eleven Media, which comes as the latest in a long series of cases brought against the media under vague and outdated laws. (Photo by Ye Aung Thu/AFP)

When journalist Lawi Weng returned from Thailand to Myanmar in 2013, he was confident he would be able to report on politics and ethnic conflict in his homeland.

Believing that press freedom was improving in the country, Lawi did just that until he ran afoul of Myanmar’s military in mid-2017.

Lawi and two other journalists were arrested after he reported on a drug-burning event organized by the Ta’ang National Liberation Army in Shan State. The journalists were charged with a colonial-era law, the Unlawful Associations Act.

Lawi went on to spend two months in a Shan State jail until he was granted bail. The military ended up withdrawing the case against them following pressure from international rights groups.

The father of one told ucanews.com that he is now very careful when covering conflict and the military, which retains political power in the country.

“If they [the military] want to target journalists, they can arrest us any time and charge us with abusive laws,” said Lawi, who is currently working for the Irrawaddy online news website. “We feel insecure and fear who is the next turn to be arrested.”

Lawi said journalists in Myanmar are not only afraid of the military but also of the National League for Democracy (NLD) government, pro-NLD supporters and nationalist groups.

When reporting on the Rohingya issue, Lawi said many journalists were strongly criticized on social media and many censored themselves when covering sensitive issues.

“In comparison with 2013, I now feel more pressured when reporting and a journalist’s life is more insecure,” Lawi said. “But we have to keep doing our work and I don’t consider leaving journalism — it’s my passion.” 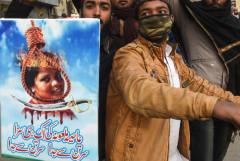 Supporters of jailed Reuters journalists Wa Lone and Kyaw Soe Oo hold a rally in Yangon on Dec. 12, 2018, demanding their freedom. Messages of solidarity poured in on that day from around the world on the one-year anniversary of the arrest of the journalists who exposed a massacre of Rohingya Muslims in Rakhine State. (Photo by Myo Kyaw Soe/AFP)

There were expectations that freedom of expression would improve when Aung San Suu Kyi’s government took office in 2016 following a landslide victory during the 2015 general election which formally ended decades of military rule.

However, many journalists and activists have since been arrested and charged under telecommunications and the unlawful associations law.

The most prominent example was the fate of two Reuters journalists Wa Lone and Kyaw Soe Oo, who were sentenced to seven years each in September 2018. They were convicted for breaching the law on state secrets over their reporting of a massacre of Rohingya Musilms in Rakhine State.

The convictions drew widespread condemnation from the West, rights groups and media watchdogs over lack of proof amid allegations that they were set up by the police.

Prosecutions for organizing or participating in assemblies surged in 2018 and more than 45 protesters were arrested, with most facing charges under the Peaceful Assembly and Peaceful Procession Law, according to the HRW report.

“Aung San Suu Kyi and the NLD promised a new Myanmar but the government still prosecutes peaceful speech and protests and has failed to revise old oppressive laws,” Lakhdhir said in a statement.

“Aung San Suu Kyi’s government has had a real opportunity to abolish the tools of oppression used by the military juntas but has instead used them against peaceful critics and protesters.”

Naw Sam, an NLD lower house lawmaker, has defended the government, saying it has allowed media freedom and amended laws such as the Telecommunications Act and the Peaceful Assembly and Peaceful Procession Law.

“We acknowledge people want to see changes with democratic values and standards, but our country is in a transition to democracy,” Naw Sam, who is also a member of the central executive committee of the NLD, told ucanews.com.

He added that it is a challenge to repeal some laws such as the Unlawful Associations Act as the military sees it as necessary for security.

“We are steadily working on amending laws which harm people, but we need to wait with patience during this transition period,” Naw Sam said.