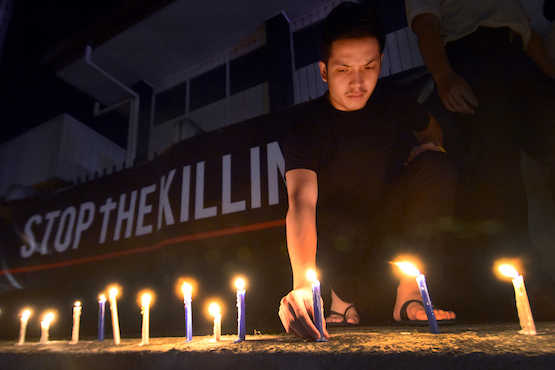 A seminarian lights a candle in Manila during a ceremony early in October to call attention to hundreds of unresolved killings in the Philippines in recent months. (Photo by Angie de Silva)

A radio broadcaster and an activist working as a paralegal assistant for a human rights lawyer have become the latest victims of what Philippine observers believe are a pattern of attacks against government critics.

Unidentified gunmen shot and killed radio journalist Christopher Iban Lozada, 29, in Bislig in the southern province of Surigao del Sur on Oct. 24. He was the fifth journalist killed in the province in the past eight years.

Less than 24 hours later, two armed men shot and killed Edwin Pura, 49, a human rights activist working as a paralegal in the town of Gubat, Sorsogon province. The victim had been active in pursuing cases against soldiers suspected of human rights abuses in the southern Luzon region.

Pura had been working as a paralegal for Espinosa. Both were part of a team that searched for local farmers who were suspected of being abducted by the military early this year.

"We believe the failed attempt to take Espinosa’s life and the killing of Pura are part of a systematic pattern of harassment by the state against its dissenters," said lawyer Ephraim Cortez, secretary-general of NUPL.

He viewed the attacks as a move to stop lawyers "from upholding and defending human rights" and from performing their functions and abiding by their oath "to defend human rights as members of the legal profession."

"These desperate actions at the expense of human life seemingly have the intention to silence rights defenders .... These incidents are alarming," said Cortez.

In a statement, the NUPL denounced the attacks and challenged authorities "to take appropriate action."

'Stark reminder' of culture of impunity

The National Union of Journalists in the Philippines (NUJP) said the killing of broadcaster Lozada was a reminder that the culture of impunity is a "growing and malignant problem" for journalists in the country.

"Lozada’s untimely death is a stark reminder that attacks against the media are still carried out with impunity," said Mart Sambalud, chairman of the union's chapter in Mindanao.

Lozada, an anchorman of DXBF Prime Broadcasting Network in Bislig, was killed when his car was stopped while he was driving home with his girlfriend.

The journalist hosted a local public-affairs program in which he frequently chided local officials on issues ranging from corruption to mismanagement.

"In Lozada’s death, we see where the danger is emerging: when politicians use their power to silence criticism," said NUJP's Sambalud.

The government's Presidential Task Force on Media Security condemned "in the strongest possible terms" the killing of Lozada.

In a statement, the task force said it issued a "red flag letter warning" to Mayor Librado Navarro of Bislig on Oct.  24 "but Lozada was killed before the letter could reach the mayor."

The red flag warning was in response to a complaint filed by Lozada alleging that his life was being threatened by the mayor.

Undersecretary Joel Egco said the task force offered to provide security for Lozada but he refused saying he has filed a complaint with the police and he just wanted to document the threats against him.

Lozada became the third journalist killed while President Rodrigo Duterte has been in office and the 178th since 1986 when democracy was restored in the Philippines.