John Paul II and John XXIII to be canonized next year 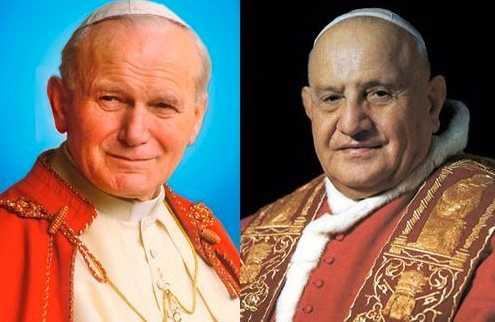 Pope Francis on Monday set the date for the canonizations of his predecessors Pope John XXIII and Pope John Paul II, saying they will be made saints together on April 27.

The date for sainthood of the two popes, widely speculated on in past weeks, means they will be officially added to the communion of saints next year on Divine Mercy Sunday, a Catholic solemnity actively promoted by John Paul II.

Pope Francis made the decision of the date Monday after a planned meeting with a consistory, or regular meeting, of cardinals present in Rome. It was announced by the Vatican press office in a daily bulletin.

The normal process to be declared a saint in the Catholic Church is lengthy and usually requires the Vatican to determine that the sainted person has been responsible for two miracles since his or her death.

While Francis approved determination of a second miracle for John Paul II in July, he moved forward with John XXIII's canonization without such a declaration.

John XXIII is perhaps most noted for convening the Second Vatican Council, a 1962-65 meeting of the world's bishops in Rome. That council led to a number of church reforms, from the celebration of Mass in the local language instead of Latin to the reorientation of the definition of the church as "the People of God."

John Paul II was the second-longest-serving pope in history and was noted for his series of trips around the world, his role in ending communism and for positions of strict doctrinal adherence to official church teachings on such issues as artificial contraception and the possibility of women's ordination.

In particular under John Paul II's reign, the Vatican's Congregation for the Doctrine of the Faith issued warnings against many Catholic theologians. Coming under special focus for critique were theologians who taught or researched liberation theology, a strain of theology popular in Latin America that stressed liberation from positions of poverty and oppression.