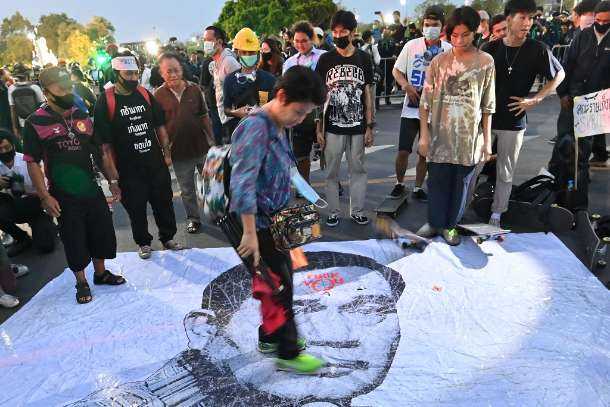 A pro-democracy protester walks across a banner of Thai Prime Minister Prayut Chan-o-cha during a demonstration in Bangkok on Nov. 8. The military’s grip in Thailand has tightened after generals exchanged uniforms for expensive suits. (Photo: AFP)

US president-elect Joe Biden will have a difficult time winning back American influence in Southeast Asia after a tumultuous four years resulted in a political overhaul that left the region struggling under authoritarianism.

Myanmar, Thailand, Cambodia, Laos, the Philippines and even Brunei now look vastly different compared with the years that preceded Donald Trump, when democratic values, tolerance of dissent, an independent press and political opposition were on vastly different tracks.

Analysts said Trump’s attitude to Southeast Asia and elsewhere was driven more by indifference and ignorance — unless seen through the China prism — as opposed to thought-out foreign policies.

That gave China, which was already competing aggressively for influence, a free hand amid a sense of urgency that naturally accompanied Trump’s trade war, particularly in countries like Cambodia.

“Trump's transactional and deal-based ties are set to be replaced with more measured policies,” said Gavin Greenwood, a risk analyst with Hong Kong-based A2 Global Risk, adding this would be based on mutual interest and knowledge of politics and economics in individual countries.

Trump has not conceded defeat since last week’s election, but Biden, due to take office on Jan. 20, is already making appointments for the years ahead which analysts hope will include hundreds of key positions in the State Department that were left vacant by Trump.

Trump argued this was streamlining the bureaucracy, others saw it as a hollowing out of the civil servants who could challenge the president on trade and foreign policy issues.

People in key positions in most US administrations tend to serve their full four-year term between elections. Not Trump, who had four secretaries of state, including two acting, and six secretaries of defense, which included three acting.

Secretary of State Mark Esper was fired by Trump on Nov. 9 and replaced by Christopher C. Miller, current director of the National Counterterrorism Department.

Trump also failed to attend summits for the Association of Southeast Asian Nations (Asean) and pulled his country out of the Trans-Pacific Partnership, potentially the world’s largest trade bloc.

Analysts said continuity was in short supply under Trump, with embassies further hamstrung by orders not to engage, which were lifted in regards to China and out of political expediency just a few months before the Nov. 3 election.

“A Biden presidency can be expected to seek to repair the often negative impact of the Trump era on many Southeast Asian countries,” Greenwood said, adding this would be reflected by a “return of regional specialists to the State Department and a more balanced relationship with the Pentagon.”

Hands tied on the sidelines, US diplomats and their allies simply watched as pro-democracy icon Aung San Suu Kyi fell from grace as her generals tightened their grip on Myanmar and instigated genocide against the Rohingya.

Cambodia became a one-party state after the main opposition party was dissolved ahead of elections in 2018. The independent press was shut down as politicians, journalists, dissidents and NGOs fled the country or were detained, and at least 60 are still before the courts.

Brunei instituted Sharia law. Laos withdrew into a hermit-like state, heavily indebted to China, which now controls its electricity grid, ending a long-held dream that a “cascade of dams” would enable Laos to enrich itself as the “battery of Asia” through hydropower.

The military’s grip in Thailand also tightened, with generals exchanging uniforms for expensive suits and cementing their control through an election derided by The Economist as “ineptly rigged” and the ascension of King Maha Vajiralongkorn to the throne.

The Philippines has not fared much better. Rodrigo Duterte became president about six months ahead of Trump and instituted his now notorious war on drugs, which the UN Human Rights Council said in June had resulted in more than 8,000 deaths.

As each country tightened the screws, Western businessmen began packing their bags for greener pastures and economic activity slumped, punishing the poorest and dashing the aspirations of millions who found cold comfort in the arrival of Chinese investors and workers en masse.

Further, Greenwood added, Trump's openly anti-Muslim rhetoric and policies had alienated opinion in Indonesia and Malaysia. They are now likely to be muted or reversed by a Biden administration.

Then came the Covid-19 pandemic and the region’s economies buckled while the US president refused to accept the new realities and politicized a disease that has cost Americans 234,000 lives, more than four times the number of soldiers killed in the Vietnam War.

He said Southeast Asian countries would now be encouraged to support Washington through concrete action rather than opaque and ambiguous declarations designed to appease China.

“Biden may decide early in his presidency to demonstrate this continuity in US policy towards Beijing with a powerful signal, such as elevating Taiwan's diplomatic status, that would force many regional governments to assess where their longer-term diplomatic and economic interests lie,” said Greenwood.

The world, and in particular Southeast Asia, has changed dramatically in the last four years. Globalization is on the back foot, spurred by the pandemic, with bilateral relations taking precedence over multilateralism to the detriment of trade blocs like Asean.

Keith Loveard, a Jakarta-based independent security analyst, said a return to old-school diplomacy would go a long way towards restoring US prestige in the region after years of neglect.

“While Trump didn't impact the region directly, the threat of some form of policy misdirection perpetually polluted the environment. Biden is a known quantity who will restore traditional processes, although that too may bring new challenges,” he said.

In restoring those processes, Biden will require a fully staffed State Department equipped for a long game as opposed to short-term transactional deals, which were too often the hallmarks of the Trump administration.