Jobs prove elusive, even as country struggles to leave its past behind 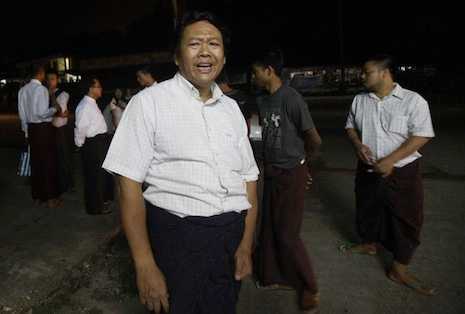 Ko Talky spent five years behind bars under the country’s former military junta. But when he was released in 2010, his troubles were not over.

“No one wanted to give me a job… I’m a former political dissident,” Ko Talky says.

He is one of 1,000 political prisoners to be released by Myanmar since 2010, according to the Thailand-based Assistance Association for Political Prisoners (AAPP). The new civilian government has embarked on a series of political and economic reforms, but for former inmates, rebuilding their lives can be hard.

Ko Talky finally found a job as a taxi driver after paying a deposit of US$500 to a taxi owner.

Along with two other former political prisoners, Ko Talky created the Golden Harp taxi group in February 2012. Known to some tourists coming through Yangon, the group also works to help other dissidents find work as taxi drivers.

“Your family is not rich, they are very poor and they cannot support you regularly. It is really difficult,” Bo Kyi told Kare News recently.

They can not find employment or continue their studies. Many are denied passports and barred from travelling abroad.

Yangon-based Assistance for Political Prisoners Association provides computer and driving training for released political inmates as they can not work in government offices. But finding work in commercial companies is not easy either.

“When I applied for jobs, I was turned down, as my existence might defame the reputation of a company,” said another political prisoner, Nyo Tun. Now a private tutor, he was behind in bars from 1989 to 1997. He said local authorities kept an eye on him even after his release, occasionally detaining and interrogating him.

Win Tin, a senior member of the main opposition party, the National League for Democracy, said he started his own Win Tin foundation with a personal donation of  US$19,000 that goes towards medical costs for the most needy former inmates.

“The government should take responsibility for these released political prisoners as they worked for the country and were put behind bars,” Win Tin said.