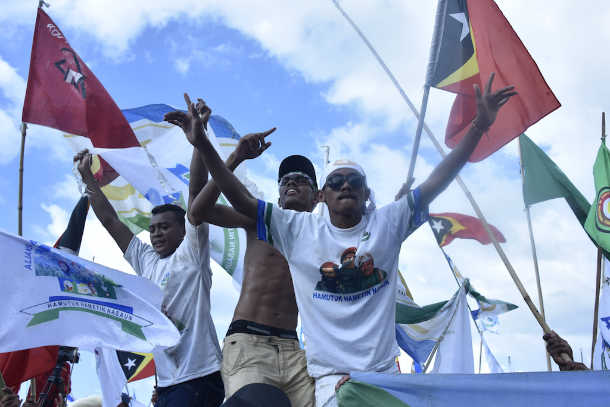 Supporters of the Allianca Mudanca ba Progresu party attend a rally in Dili on May 8. Timor-Leste political parties have developed strong links with street gangs passing themselves off as martial arts groups. (Photo by Valentino Dariell De Sousa/AFP)

The new Timor-Leste government of Prime Minister Taur Matan Ruak appears determined to tackle one of the Catholic nation's perennial problems, youth unemployment, which has led to a disturbing street gang culture and significant worker migration to Europe, South Korea, Australia and elsewhere.

Part of the government program, passed by parliament in July, is a promise to create 60,000 new jobs for the country of just 1.2 million people.

Since Timor-Leste gained its independence in 2002, the biggest underlying problem has been unemployment, which has resulted in a flood of young people heading abroad for jobs. Every morning many Timorese youngsters line up near the Portuguese embassy in Dili to process their Portuguese passports so that they can travel to Europe for work.

More than 20,000 Timorese are now working in Northern Ireland and England. Thousands have headed to South Korea and others to Australia. Every week, they wire money back to their families, a situation not uncommon in Southeast Asia's poorer nations such as the Philippines, Indonesia, Myanmar and Laos, which have millions of citizens working abroad both in the region and particularly the Middle East.

The Timor-Leste population continues to grow at about 2.2 per cent annually compared to 1.28 per cent in Indonesia. Its population pyramid shows a "youth bulge" in the 5-15 age group, which means that more than 300,000 people will join the working age population over the next 10 years.

In 2018 and each following year, more than 30,000 Timorese will celebrate their 15th birthdays and join the working age population. Even with a low labor force participation rate of about 30 per cent in Timor-Leste, this means 9,000 new entrants to the labor market every year, yet currently only about 4,000 new jobs are being created annually.

With an estimated unemployment rate of 11 per cent, only about 190,000 people are employed out of a population of 1.2 million. In other words, every person with a job is supporting on average more than six people. About 485,000 people of working age are outside the labor force or unemployed.

Timor-Leste independence hero and former president and prime minister Xanana Gusmao appealed to young people to contribute to the peace and stability of the country on Aug. 15.

Street gangs have become a problem not just in Dili but also in other major towns like Ainaro and Same. In impoverished communities like Lospalos, 250 kilometers east of Dili, a gang's promise of camaraderie, protection and purpose is often too good to ignore.

Street gangs often frame themselves as martial arts or sports organizations. Kera Sakti, founded in 1995, has about 6,700 members, about 38 percent of them women. Like other martial arts groups, it claims to be solely a sporting organization, but it has bitter rivalries with other groups, particularly PSHT and Korka, and its members are widely believed to be involved in recent violence. It has a poor image in the community.

Korka (Kmanek Oan Rai Klaran) is believed to be the biggest of the martial arts groups with more than 20,000 members. It has been consistently accused of provoking and committing violence, most notably burning down 50 houses in Ainaro in August 2004.

In 2017, Korka officially affiliated itself with the Khunto (Kmanek Haburas Unidade Nasional Timor Oan) political party, which is now part of the coalition Alliance for Progress and Change government.

PSHT (Persaudaraan Setia Hati Terate) is alleged to have been closely linked to violence. It originated in Indonesia and has several international branches. Although PSHT in Timor-Leste claims to be independent of the Indonesian branch, border police have detained hundreds of PSHT followers travelling to Atambua in Indonesia for graduation ceremonies.

Although not formally affiliated, PSHT is widely perceived to be close to the National Congress for Timorese Reconstruction (CNRT) and People's Liberation Party (PLP) political parties. Members are believed to use the organization to settle family and communal disputes.

In 2013, the government issued a resolution to halt martial arts club activities in Timor-Leste following numerous incidents of violence and killings involving their members. But in the 2017 and 2018 elections, many political parties used martial arts groups to get votes. Ministers or deputy ministers from Khunto packed their offices with Korka members. The PLP did likewise with PSHT members.

In early August, Matan Ruak promised before parliament that his government would provide 60,000 jobs for young people so that they would not have to leave their country.

But Rui Castro, deputy president of Timor-Leste Chamber of Commerce, is pessimistic about the "unrealistic" plan, saying it was prepared by people who do not understand the country's economy.