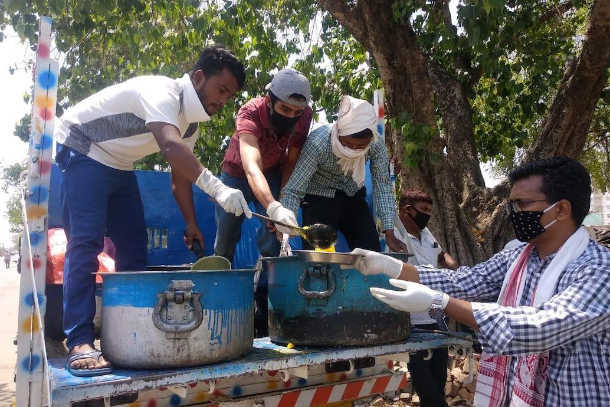 Jesuit volunteers serve cooked food on April 16 in a village in Bihar state amid a nationwide lockdown to check the spread of the Covid-19 pandemic. (Photo supplied)

A Jesuit mission in eastern India is working with a government agency to feed thousands of impoverished low-caste people lacking food during the Covid-19 lockdown.

Some 40,000 people of the Musahar community, known as the rat-eating caste, live on the outskirts of Patna, the capital of Bihar state, doing menial work such as cleaning and scavenging.

These people lead a hand-to-mouth existence and were going hungry after the government imposed a nationwide lockdown on March 24 to try and curb the virus's spread. The lockdown is due to be lifted on May 3 if conditions allow.

“I was shocked when many people came to me asking for food saying they had not had any for straight four days,” Jesuit Father Juno Sebastian told UCA News on April 13. He had visited them a week earlier.

He said he worked with the Indian Railways Catering and Tourism Corporation to provide cooked food to the outcast community.

The community, known for hunting and eating rats due to their poverty, are at the bottom of India’s caste-based society. They are treated as "untouchables," especially by upper-caste Hindus.

Bihar has nearly 2.2 million of these caste members, according to state records. However, activists estimate there are some three million people belonging to this community. About 96.3 percent of them are landless and work as farm laborers. About 10 percent can read or write.

The state’s highly caste-conscious social system does not allow them to mingle in the social mainstream. They live secluded in hamlets earmarked exclusively for them, mostly on wasteland or other areas where most people do not go.

Father Sebastian said officials from the railway agency, which deals with serving food on trains, readily agreed to help them. They began distributing some 5,000 food packs to the most vulnerable, including children and the elderly, as urgent relief aid.

“Now we are distributing cooked meals to 1,500 such people daily, and it will continue until the lockdown ends. We are also working to help 6,500 Musahar families in Patna, numbering some 40,000 people,” he said.

The Bihar state government was also distributing free grain and food to these people through its public distribution system. But many are unable to take advantage as they lack documents proving where they live and confirming their identity, said Father Premlal Lucas, who teaches at Jesuit-run St. Xavier’s College of Management and Technology in Patna.

The college has arranged food for 530 Musahar families and is in the process of arranging further resources to ensure a continued food supply for these people, he said.

The provincial of the Patna Jesuit Society, Father Donald Miranda, said they are also feeding 700 other families in Patna's slums and nearby villages.

“The province has also extended help to parts of Uttar Pradesh, so we are now feeding nearly 3,000 families daily,” he said.

“It is a difficult time for everyone, especially the poor who don’t have anything to eat. We need to extend whatever help we can for them,” the provincial said.

Covid-19 is spreading fast across India, infections are doubling every week. As of April 20, India had recorded 17,200 cases and 543 deaths from the pandemic.