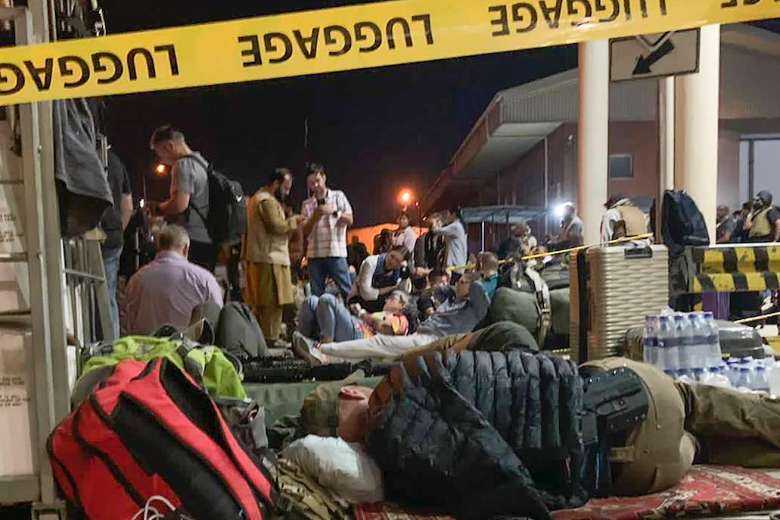 French and Afghan nationals wait to board a French military transport plane at Kabul airport on Aug. 17 for evacuation from Afghanistan after the Taliban's military takeover of the country. (Photo: AFP)

The Jesuits have suspended their mission in Afghanistan and two Indian priests are waiting to be evacuated after the Taliban took control of the strife-torn nation on Aug. 16.

Four Missionaries of Charity nuns are also stranded in Afghanistan and will probably be moved to their countries, church sources said.

“Our two priests are stuck in Afghanistan and are waiting for their evacuation,” said a Jesuit priest based in New Delhi, India’s national capital.

“We have also suspended our mission in Afghanistan indefinitely as we are not sure when the situation will improve.”

The two priests and a Missionaries of Charity nun are among many Indians waiting for the Indian government's evacuation flights to get them out of the country.

The Jesuits “are so far safe and are ready to fly to India when India resumes its flight service to evacuate Indians stuck in Afghanistan,” the priest who did want to be named told UCA News on Aug. 17.

Jesuits had planned to continue their mission in Afghanistan

A senior nun in the Missionaries of Charity headquarters in India’s Kolkata city confirmed that their four nuns are in Afghanistan and one of them is an Indian. But she refused to give other details, fearing for the safety of the nuns.

“Yes, it is true our four nuns are working in our Afghan mission. One of them is Indian,” said the nun, who refused to give even the nationality of the other nuns.

The Missionaries of Charity, which St. Teresa of Kolkata founded in 1950, arrived in Kabul in 2004 for humanitarian work.

Father Stany D’Souza, president of the Jesuit Conference of South Asia, said both the Jesuits are safe. “We are in touch with them,” he said.

Until last month, the Jesuits had planned to continue their mission in Afghanistan.

In a July interview with UCA News, Father Jerome Sequeira, the head of mission in Afghanistan, said they “will continue to accompany and give hope to the suffering people in whatever way is possible for us.” However, he admitted that they were not sure what was in store for them.

In 2014, suspected Taliban fighters abducted Jesuit Father Alexis Prem Kumar in Afghanistan, while he was visiting a school in Herat province. The priest was released in February 2015.

The Jesuits arrived in Afghanistan in 2004 to join hands with the Afghans in rebuilding the war-ravaged nation through education. That was two years after Pope John Paul II established a mission for Afghanistan in May 2002.

The Jesuits as part of their work trained more than 300 young teachers, helping the education of more than 25,000 young boys and girls in four provinces.

Young girls were major beneficiaries of the Jesuit mission in a country still haunted by memories of the Taliban’s misogynist rule before it was toppled in 2001.

The Jesuits’ links with Afghanistan go back more than 400 years. In 1581, Mughal Emperor Akbar took along a Jesuit priest from Agra in northern India to Kabul.