He may have the chance to fulfill his Oriental yearnings 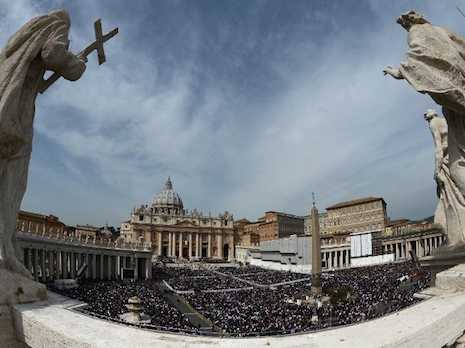 In 1523, former soldier Ignatius of Loyola, fired up by his recent spiritual awakening, embarked on a mission to the Holy Land to preach to non-Christians.

But when he arrived, he encountered resistance from the Franciscans and was forced to return to Europe – where he kept studying and preaching, eventually founding the Jesuits 11 years later.

Four centuries later, Jorge Mario Bergoglio, the future Pope Francis, wanted to follow in the footsteps of his order's founder and asked his superiors in Argentina to send him on a mission to Japan.

“I entered the Society of Jesus as I was attracted by their image of being 'on the frontlines' of the Church, to use a military term. And by their missionary vocations,” the future pope said in a 2010 book-length interview “El Jesuita,” written with two Argentinian journalists.

“But because of a health problem I had since my childhood I wasn't allowed to leave.” After an infection, a part of one of Bergoglio's lungs was removed when he was a boy.

In the book, the future pope jokes about his frustrated ambition, but his youthful longing for Asia should now play a key role in his pontificate. “Looking East” will be one of the key challenges for his reign, analysts say.

Italian geopolitics magazine Limes has just published a volume on Pope Francis' Church and the issues he must face to bring Catholicism back to the forefront of the global stage. Most of the experts who contributed to the volume agree that Asia – and chiefly China – will play a key role in the Church's future.

According to Limes' lead article, Pope Benedict put Christianity's regression in Europe and in the secularized West at the center of his proposal of the Church as a “creative minority,” preaching a renewed alliance between reason and faith.

But his recipe proved “intellectual,” “cold,” and eventually “unsuitable for a 'fisherman of souls'” as the pope should be, the article says.

Pope Francis, on the other hand, “to reconquer the world and in obedience to the ad gentes mission which is at the root of the papacy's religious geopolitics and of the Jesuit charisma, refuses every elitist temptation. The sin of a “self-referential Church" was the theme at the center of his address to the cardinals ahead of the conclave.

In this sense, analysts expect the first non-European pope in over 1.000 years and the first pope ever from the South of the world to offer a renewed missionary drive and attention to what have traditionally been considered the outskirts of the Catholic realm – outskirts that, thanks to the demographical and economic transformations of the past decades, have become the real “center” of the Church, according to Limes.

China will be “the real testing ground” of Pope Francis’ resolve to make the Christian message truly universal, writes Alberto Melloni, a renowned historian of the Second Vatican Council. China and Asia in general “pose the problem of the poverty of the Church in a dramatic way,” he writes. “Christianity learned to be poor to preach the Gospel in the Celtic, Slav, Arab and African world... it will now have to walk that same path of poverty to learn the language and culture of men and worlds that cannot be far from God.”

Francsco Sisci, a long-time China expert for the Italian daily La Stampa, sums up the issue in these terms: “In this century, will Catholicism be the religion of Europe and its former colonies, a sort of cultural identity brand of that region of the world, or will it be a truly global message? This hangs mostly on what the Vatican will do in Asia.”

To succeed in the East, the Church must “distance itself of its tradition as the 'religion of the West',” he says, especially as it is faced – just like in Bergoglio's Latin America – by the rise of Protestant groups and churches.

In 1949, when Communists rose to power in China, both Catholics and Protestants accounted for around 1 percent of the Chinese population, today estimates put evangelicals and other neo-protestant groups at around 10 percent of the population, while the Catholic share has remained stable.

According to Manlio Graziano, professor of religious geopolitics at the University of Paris IV, China and Asia might hold the answer to the vocation crisis that has been hampering the Church for the past 50 years: “If the Church could expand freely there and achieve the same recruitment rates it has in India, one of the highest in the world, some of its organizational problems would be solved.” In 2011, Graziano notes, the priest to Catholic ratio in India was triple than in the US, even without taking into account the dozens of priests Indian dioceses 'export' to the rest of the world.

Nevertheless, the Asian challenge won't be an easy one for Pope Francis. Benedict's overtures to China, starting with his 2007 letter, didn't bring much fruit, according Stefano Picciaredda, history professor at Foggia University in Italy. Now there is a risk is that the Catholic Church portfolio will fall to the bottom of the list of the new Chinese leadership.

Alessandro Speciale is the Vatican correspondent for ucanews.com