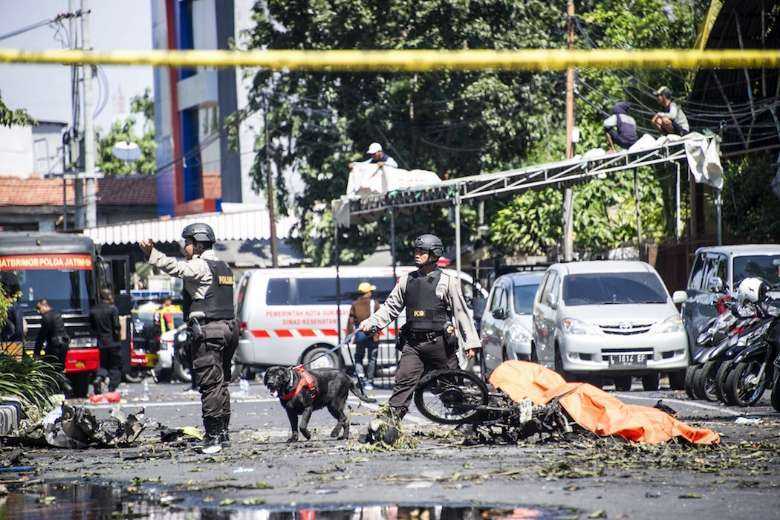 Indonesian police examine the scene of a terrorist bomb attack outside a Pentecostal church, one of three churches bombed in Surabaya, East Java, in May 2018. (Photo: Juni Kriswanto/AFP)

Indonesian police have arrested at least 232 suspected terrorists this year, most of whom are believed to be members of Jemaah Islamiyah, considered one of Southeast Asia’s deadliest terrorist groups.

The latest arrest last week was that of Zulkarnaen, one of the men believed responsible for the 2002 Bali bombings that killed 202 people, mainly tourists, and for attacks on several churches 20 years ago.

The latter was responsible for the killing of four Salvation Army members in Sigi, Central Sulawesi, at the end of November.

According to police, these arrests show the war on terrorism is far from over and despite the arrest of many leaders these groups are recruiting new members to carry out attacks.

Much of this recruitment is being carried out via social media due to restrictions caused by the Covid-19 pandemic.

The arrest of Zulkarnaen and over 30 other Jemaah Islamiyah members in the past three months has raised concerns that the group is poised to launch attacks again.

Some experts remain unsure, though, with some saying it has changed its strategy and is not the same outfit it was two decades ago.

They say Jemaah Islamiyah is now ideologically different from the Islamic State-linked JAD or East Indonesia Mujahedeen, which still believe in attacking and bombing their way to establishing an Islamic caliphate in Indonesia.

Even if it is backing down from launching attacks, Jemaah Islamiyah is still a threat to Indonesia as it actively spreads radicalism through educational and research institutions. Most observers are warning it would be wrong to believe the group has renounced violence.

For Christians, the recent arrest of Jemaah Islamiyah members and the thought of its return reopen old wounds it inflicted 20 years ago.

On Christmas Eve of 2000, the group bombed more than 20 churches and Christian facilities across the archipelago, including Our Lady of the Assumption Cathedral in Jakarta.

Eighteen people reportedly died, including Riyanto, a 19-year-old Muslim who was helping guard a Protestant church in Mojokerto, East Java. He died as he attempted to remove a bomb placed inside the church. His sacrifice is commemorated annually by Christians and Muslims.

Ali Imron, a former Jemaah Islamiyah jihadist on death row but who is now undergoing a deradicalization program, once said on a television program that the church attacks were in retaliation against Christians for persecuting Muslims during a sectarian conflict in Poso, Central Sulawesi, from 1998 to 2000.

Christians were seen as a stumbling block in the creation of an Islamic caliphate there.

Similarly, he said, the Bali bombings two years later and against other Western symbols in the following years were attacks on the enemies of Islam.

Police said Zulkarnaen, a commander back then, played an important role during the Christmas Eve attacks because he was an experienced fighter, had military training and had been involved in previous sectarian conflicts in Ambon, Ternate and Poso.

Also, four months before the church bombings he was involved in the bombing of the Philippine ambassador’s residence, which according to Imron was an act of solidarity with Muslim extremists in the southern Philippines.

The arrest of Jemaah Islamiyah members this year or in previous years does not mean the end of this group, which according to Imron has not changed its goal. Just like other terrorist groups, its members are waiting for the right moment to strike and achieve its mission to establish an Islamic state.

There’s no time limit on when this will be. The threat is still there and the terrorists believe that Indonesia, with its high level of intolerance and radicalism, is fertile ground for any terrorist group.

The threat from the group should not be underestimated, according to former terrorists.

Just after the 2016 attacks on Jakarta’s Sarinah commercial center by Islamic State jihadists, in which innocent bystanders and the perpetrators were killed, one former Jemaah Islamiyah commander, Nasir Abas, warned security forces to not only hunt Islamic State members but also his former colleagues who he said was preparing to return with a bang.

Celebrations like Christmas and New Year have become very nervy periods as a result of the deadly attacks 20 years ago, which has resulted in the military and police guarding churches and public facilities during this period ever since.

This year the arrest of radical cleric Muhammad Riziq Syihab, and the shootout between his Islamic Defenders Front supporters with Indonesian police that killed six of the group’s members, will likely raise tensions further this month.

No one knows exactly “the right moment” that the terrorists are waiting for, but Christmas would be a good guess.

But with the military and police again on guard at churches this year, there should be no reason to fear another deadly Christmas.