Japan's suicide catcher has one word for lost souls 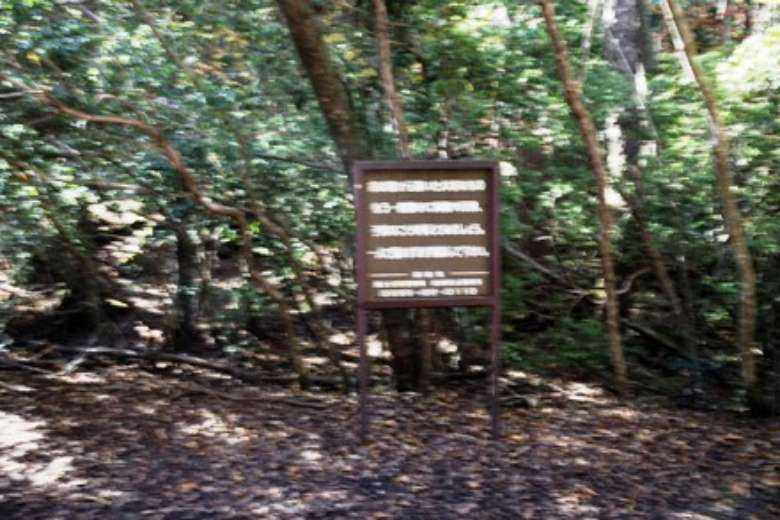 A suicide warning at the entrance to Aokigahara Forest, known as Suicide Forest, in Japan's Yamanashi prefecture. It reads: "Life is a precious thing that you have from your parents. Try to calmly think about your parents, brothers and sisters, your children. Please do not keep things to yourself. Talk to someone." (Photo: AFP)

Ask him how to address a person who is about to take his own life and he says the world’s most ordinary word, Konnichiwa (Hello), is the best.

It may sound strange but this is how 77-year-old Yukio Shige has saved 721 lives so far.

We are in Tojinbo in Fukui prefecture. On average, 24 people die here annually. But this year, "thanks" to the coronavirus, there have already been 34 deaths. In numbers, it is next only to Aokigahara, the suicide forest of Japan under Mount Fuji.

The end comes with a leap from the cliffs overlooking the Sea of Japan. "They intentionally mingle with tourists, complete with a fake backpack or a trolley that is empty, and at dusk when no one is around anymore, they perform the fatal gesture," says Shige.

A former police officer, Shige leads a non-profit organization (NPO) of volunteers seeking to stop the loss of these mostly young lives. They are mostly in their thirties, males and with blood type A.

How does a suicide-prone person react to the approach of a stranger? Shige says many let him approach but some respond nervously, asking to be left alone.

“What the hell are you saying? This is a tourist area — do you want to ruin it?” he responds. Playing on the high civic sense of the Japanese always works.

Are there any taboo phrases? "You can do it!" "Don't be discouraged!" Or, for those in debt, telling them they can find help from third parties will not be effective, he says.

Instead, what must be done is to provide them with unconditional protection. "If you don't have money, I'll give it to you. If you don't have a place to stay, I'll take care of your problems." But it cannot be debt, Shige stresses, it has to be an unconditional gift. It is only then that they begin to perceive a faint glimmer of light from the abyss they have plunged into.

"Nobody really wants to die,” he says with a sort of Zen wisdom. It is a fruit not of meditation but of two decades of sweaty exercise in the field.

And Shige always keeps his word. In the first five years, he spent something like US$30,000 out of his own pocket (now the government has also started to support his NPO). He gives those he saves room and board and, when he can, even a job. On average, they remain for several weeks.

"Everyone thinks that in the apartment where these at-risk individuals live together, sooner or later someone will find a way to end it. But in 18 years no one has ever tried to take their own life," he says.

He frowns when told that he is called jisatsu-boushi, a person who prevents suicides. "I am a mere jinmei-kyujo, a savior of lives," he says.

Around 5am, a volunteer who has returned from patrolling the coast comes back. What have they been looking for? "Lonely people with a dull aura," Shige says

We then move toward the cliffs that are 1,000 meters long and teeming with tourists. I ask him if the crowd discourages the most unfortunate acts. “Not at all,” he replies.

“It is enough that the weather is good, usually between 8pm and midnight. Nobody ends their days in rain or cloudy weather,” he adds.

Today an exceptional sun shines. About 10 minutes pass and a volunteer from a distance begins to gesticulate. They got one. Just now. They convinced him to come to the café-office we just left.

With a black backpack, jeans and greasy mask, the guy doesn't even seem to be walking; he drags himself indolently and has a nervous tic.

An assistant shows me a piece of paper; it is the will the man had in his hand.

What follows is a real police-style interrogation. No fake sympathy but straight to the generalities: work, marital status, information about the family

Shige sits on a table next to the guy, who for convenience we will call Yuki, and begins to read aloud the contents of the letter that can be summarized as: “My spirit is exhausted. Nothing new can manifest itself in this life of mine. I have lost every battle. I am happy that the curtain has finally fallen on this f***ing existence.”

What follows is a real police-style interrogation. No fake sympathy but straight to the generalities: work, marital status, information about the family.

Before becoming a savior, Shige worked for 40 years in the police force. He is totally in control of the scene. With a persuasive and decisive voice, he gets the wallet that contains 10,000 yen (about $90), but he senses that there is more.

It turns out that after years of humiliation in the family, in a fit of exasperation, he had stolen $1,000 from the supermarket where he worked.

He then wandered for months across various prefectures and once the booty was exhausted he decided it was time to end it all.

Finally, Yuki will be saved by Shige.

He gives me a booklet with dozens of photos of those saved earlier. They are portrayed from behind, a few moments before one of the volunteers addressed them. All of them were redeemed from certain death.

Shige had the booklet printed to instruct the uninitiated on how to locate these lost souls. “If you happen to cross them, say hello. Doesn’t cost anything,” he reiterates.