For Father Paul Koroluk, Holy Week in wartime was 'the deepest and most meaningful' he has ever had 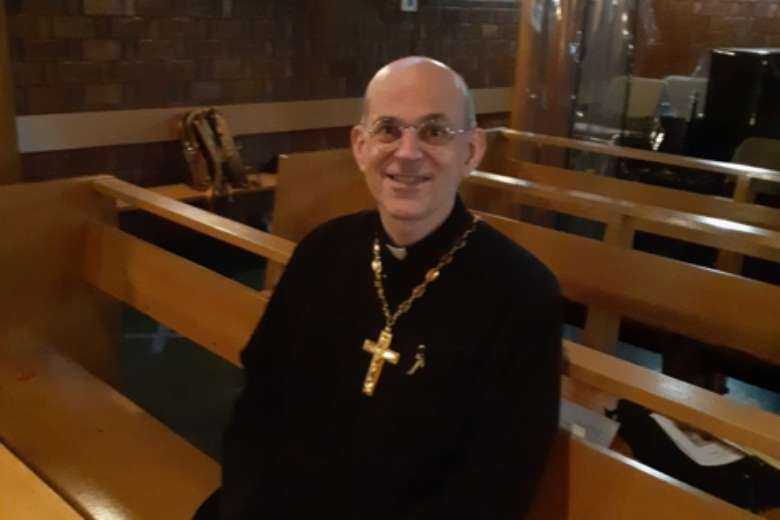 "It wasn't a place for us to go as Ukrainians and safely pray," recalls Father Paul Koroluk, the only Ukrainian Orthodox priest in Japan.

The Ukrainians wanted their own church, but there were few of them in Japan, and "there was no money or building," he says.

Six families got together and appealed to the Patriarchate of Kyiv (Kiev) for assistance. The reply was the suggestion, "If one of your men studies, he can become a priest for this congregation."

"At the time, I was the only one who had no excuse to refuse," laughs 56-year-old Father Koroluk.

The congregation still has no church building, and the community gathers in an Anglican-Episcopal church in Tokyo. Father Koroluk works a regular job outside the church in addition to his pastoral service. "I'm so happy that the Lord uses me in this way," he says.

The priest's paternal grandparents and their siblings were murdered by Soviet Russians. His father's brother was forced to enlist in the Soviet army and was killed in action

As of May 21, some 1,000 Ukrainian refugees had arrived in Japan, fleeing the Russian invasion that began on Feb. 24. So far, only three families in the group have been contacted, and Father Koroluk and his community are thinking about how to make more connections.

According to the Ukrainian embassy in Japan, three-quarters of the population of that country feel that "religion is a part of life." Ninety percent of those who belong to some religious organization are Christians, and more than 70 percent of those are Orthodox believers.

Ukraine has been attacked many times throughout its history by Russia and the Soviet Union in the east and by European powers in the west.

Father Koroluk’s family illustrates this history. The priest's paternal grandparents and their siblings were murdered by Soviet Russians. His father's brother was forced to enlist in the Soviet army and was killed in action.

At the start of World War II, Nazi Germany occupied Ukraine. His maternal grandparents and one of his mother's siblings lost their lives in Nazi camps.

"Ukraine has been persecuted by Moscow and Berlin, Stalin and Hitler," says the priest.

When World War II ended, Father Koroluk's parents were in Germany. Even though the war had ended, Ukraine, which was now part of the Soviet Union, was not a safe home. So, they applied to three countries for asylum. The first to accept them was the United States and they went there.

Father Koroluk was born in the United States. From his childhood, the Ukrainian Orthodox faith was part of his life. His family never missed prayers and always made the sign of the cross when starting something.

"I took that for granted. As I grew up, I realized that there are people who live without faith, but faith was part of my life," he says.

"I hear sad news every day, I'm tired every day. But the goal of Holy Week is to unite faith with the terrible realities of this earth. The hearts of the people in the Bible who welcomed Christ and those who hated Him and cried out 'Kill him!' are both in me"

When he was in his 20s, Father Koroluk became interested in aikido and moved to Japan. He intended to spend a year studying the martial art and then return to the United States to open a dojo (training school). However, he says, “somehow this is an easy place to live,” and so he stayed in Japan.

Though he was able to live comfortably in Japan, he felt the lack of “a place to pray.” There was no Ukrainian Orthodox Church in Japan, so he went to Russian Orthodox and Catholic churches in search of a "prayer church."

He likes the Catholic Church and still considers a Benedictine priest he met at that time his "mentor." Still, "something was a little different from my church."

The priest says that Holy Week this year was a time of special reflection for him.

"I hear sad news every day, I'm tired every day. But the goal of Holy Week is to unite faith with the terrible realities of this earth. The hearts of the people in the Bible who welcomed Christ and those who hated Him and cried out 'Kill him!' are both in me. I must face this self. It is precisely because this earth is in such a difficult time that we must face this reality without running away. It was a very sad and disturbing Holy Week, but it's the deepest and most meaningful Holy Week I've ever had in my life."

About 40 believers gathered for the Palm Sunday liturgy. Among them some praised their priest's personality, saying that he is notable for his "embracing warmth" and that "he does not hide his weaknesses."

Father Koroluk says, "I'm not good enough as a priest, but the Church of Christ is wonderful, so even I, who am the weakest, can do something to help people."

He was hospitalized five years ago. At that time, the nurses took care of him "as if I was the only person in the world. That experience was huge for me, and now when I interact with people, I want to do the same," he says.

TERRY WASHINGTON
To quote Tertullian(one of the early Church Fathers), "the blood of the martyrs is the seedbed of the Church!" Hopeuflly something good will come out this conflict for the Ukrainian AND Russian Orthodox Churches!
Reply