PM unrepentant over visit that may well increase tensions 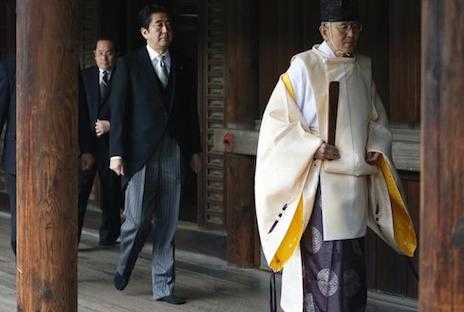 By Peter Ford and Justin McCurry for Christian Science Monitor

China reacted fiercely, issuing a “strong protest and severe condemnation” of Mr. Abe’s visit to Yasukuni, where the memorials of 2.5 million war dead, including 14 Class A war criminals, are enshrined. A minister in South Korea, which also suffered grievously under Japanese occupation, called the move “deplorable.”

Abe’s visit to Yasukuni, the first in seven years by a sitting prime minister, appeared to kill any hopes of early reconciliation among the three nations, currently locked in territorial disputes and resentment over Japan’s behavior during and before World War II.

“This is one of the worst possible things he could have done,” says Jia Qingguo, a professor of International Studies at Peking University. “Pragmatic management of the problems between China and Japan will become more difficult.”

Abe told reporters after the visit, which marked the first anniversary of his inauguration, that he had intended to “convey my resolve that people never again suffer the horrors of war,” and that “I have no intention to hurt the feelings of the Chinese or Korean people.”

Although “he knew this would cause uproar,” according to one Japanese official familiar with Abe’s thinking, the Japanese leader reasoned that he had little to lose. “Relations with China cannot go further south – they have hit bottom,” the official said. The two nations are locked into a bitter dispute over ownership of a group of rocks known in China as the Diaoyu islands and in Japan as the Senkaku.

Prof. Jia is not persuaded. “This can definitely make the relationship worse,” he warns, “and there are people in China thinking of tougher actions that China can take” in its military standoff around the islands.

The US embassy in Tokyo, in an unusually rapid response, said Washington was “disappointed” by Abe’s action, which it feared would “exacerbate tensions” with Japan’s neighbors. The shrine visit marks another turn of the screw in the region a month after Beijing declared an aerial defense identification zone over the disputed islands, a move Japan angrily rejected.