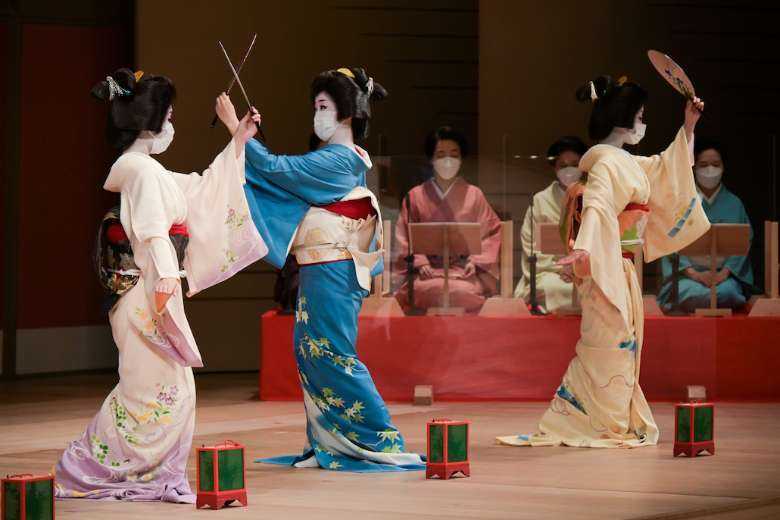 Geisha apprentices rehearse on a stage at Minamiza in Kyoto. The conservatives in charge of Japan's government retain Confucian, traditional mindsets and are not happy about the growth of gender equality. (Photo: AFP)

According to the Global Gender Index 2021 reported in late March by the World Economic Forum (WEF), Japan ranked 120th among 156 countries.

At the root of the problems presented by the WEF, one can detect a tug of war taking place between the Enlightenment’s respect for individual rights — in particular women’s rights — and traditional views of women, be they Christian, Islamic or Confucian.

I interpret the WEF list as illustrating five types of countries according to the level of their gender gap.

The first type, which I call Group A, are those countries with the smallest gender gap, such as Scandinavian and other largely non-religious countries.

Group B is composed of countries in the West and Latin America that are fairly religious.

Until the mid-20th century, Roman pontiffs often stressed that gender mingling was undesirable whether in schools or at Mass

Near East and Middle Eastern countries with conservative Islamic traditions such as Saudi Arabia are Group E. South Asian Muslim countries are also generally in this group where the two genders are segregated at religious ceremonies as well as in public education.

The level of gender segregation in Groups A-C decades or a century ago was rather similar to today’s Saudi Arabia. So, how did they depart from the Saudi path?

In short, their traditionalism retreated under the pressure of the Enlightenment, which advocates gender equality. Let me sum up what happened specifically in educational and religious spaces in each group.

In Group A, comprising major actors of the Enlightenment era, gender segregation barriers were lowered during the course of the 18th and 19th centuries, earlier than in other groups. They generally value women’s rights while discarding traditional views of women. Countries in this group, though traditionally mainly Protestant, are today largely de-Christianized.

Group B followed a path similar to Group A, though with a delay of a half century or more due to persistent traditionalism. This group is composed of a number of Catholic countries plus the largely Protestant United States.

Until the mid-20th century, Roman pontiffs often stressed that gender mingling was undesirable whether in schools or at Mass. In Catholic churches of that era, women were often seated in pews on the left side while men sat on the right.

Countries of Group C (Confucian) have a conservative view of women, similar to Catholics in Group B. They started lowering gender-based barriers even later than Group B. Even today in Japan, there are gender-separated events like NHK’s very popular TV program Women (Red)-vs-Men (White) Song Contest.

Countries in Group E (conservative Islam) remain very reluctant to accept the Enlightenment and hence, even today, gender segregation barriers remain solid in educational and religious spaces. Some hardliners like the Taliban continue to make determined efforts to exclude women from the educational arena.

Countries in Group D (Southeast Asian Islam) such as Indonesia are, unlike Group E, being secularized to some extent and accepting co-education in public educational systems.

In Europe, 30-50 percent of executives at listed corporations are women

As the gender segregation barriers at educational as well as religious spaces were generally lowered over the last two centuries, what was considered normal 100-150 years ago has proved obsolete today, except for Group E. A similar process is at work in the political realm.

In Group A, women have taken the helm of governments in Scandinavia, Germany, New Zealand and elsewhere. In Europe, 30-50 percent of executives at listed corporations are women.

Even in Group B, previously regarded as conservative, countries like Ireland and Spain have lately undergone a drastic transformation. Ireland has had female presidents for some 20 years. In Spain, the Socialist Labor Party in 2018 shaped a new government where more than half the ministers were female.

As of 2021, the US has its first female vice president. In these three countries, these changes took place when power shifted from conservative to liberal parties.

In Group C, people’s minds have also steadily shifted due to generational changes. Taiwan elected its first female president while legalizing same-sex marriage. The Republic of Korea introduced a gender quota system for parliamentary elections, imposing a quota in favor of female candidates.

Although in each group gender barriers still remain persistent in such arenas as politics, administration, jurisdiction, business and various professions, pressures stemming from the Enlightenment are rising.

In fact, younger politicians in Japan have become more aware of gender issues

What about Japan? The conservatives in charge of government retain Confucian, traditional mindsets and are not happy about the growth of gender equality. Against this backdrop, is the transformation of Japanese society likely? A clue may lie in the precedents of Catholic countries as Japanese conservatives’ adherence to the particular role of women appears to be somewhat parallel to Catholic conservatism.

As some previously very conservative Catholic countries like Ireland and Spain shifted their stance closer towards the Enlightenment, thereby lowering gender barriers, similar shifts may well take place in Japan.

In fact, younger politicians in Japan have become more aware of gender issues. Over the last few years, endeavors are being made in areas such as jurisdiction, administration, legislature, local bodies and businesses to promote paternal childcare, de-facto marriage, same-sex marriage, LGBT, dualization of married couples’ surnames, introduction of gender quota systems for parliamentary elections and so forth.

Unlike the West where confrontational approaches are common, Japanese prefer passivity (i.e. waiting) to crude confrontation until social environments in favor of compromise (i.e. consensus building) are matured. It is imperative to comprehend rival positions and wait for the right circumstances to jell.

In this respect, it is worth noting that the social environment of Japan is changing little by little. For instance, the government party has started to study some of the aforementioned issues. Can younger politicians, whether in power or opposition, capitalize on this new momentum? We should watch this with scrupulous attention.

Kagefumi Ueno is a former ambassador of Japan to the Holy See. This is a revised version of an essay that first appeared on the Kyodo-47NEWS site on June 19. The views expressed in this article are those of the author and do not necessarily reflect the official editorial position of UCA News.