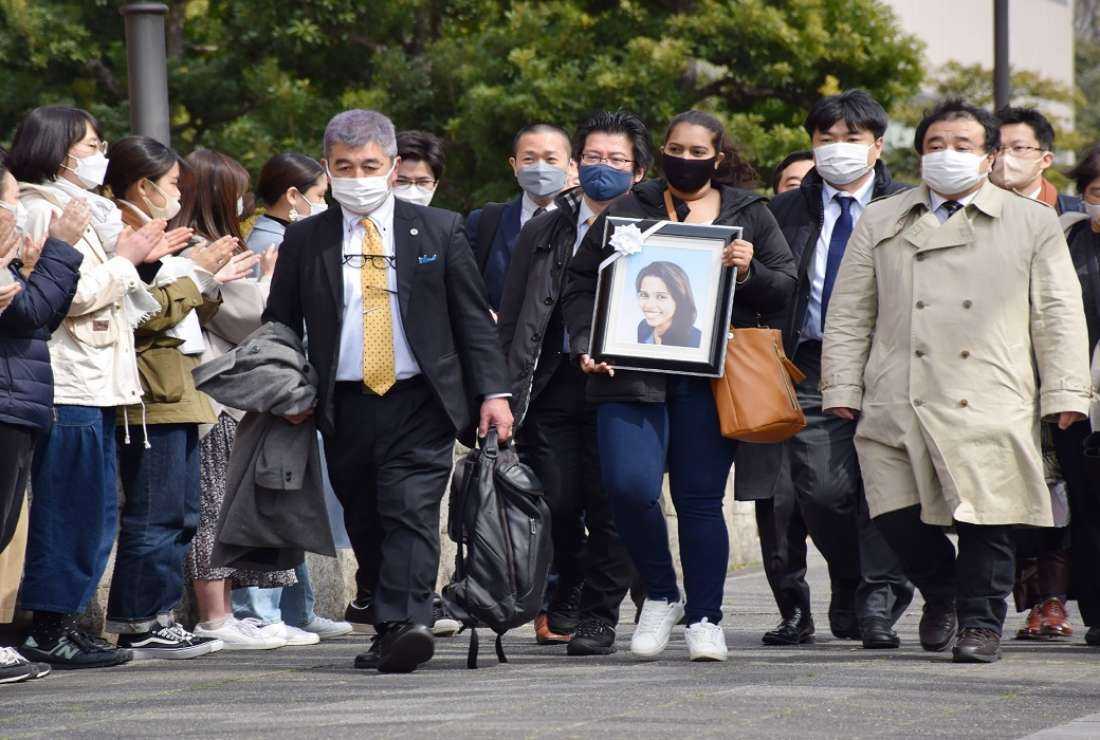 The sister of a Sri Lankan woman, Wishma Sandamali, who died while in Japanese immigration detention, carries a picture of her late sister as she walks to the Nagoya district court on March 4 to file a lawsuit against the government of Japan. (Photo: Jiji Press/AFP)

He allegedly electrocuted himself by tampering with a television cable in his cell at an immigration detention center in Tokyo. This is how a 56-year-old Italian met his demise last week.

He had been in custody since Oct 25 because his residency permit had expired. He arrived in Tokyo in 2005 and married a local woman in 2008. He was originally from Assisi, the town of St. Francis, and like the saint he owned nothing. He was living like a homeless person for a year despite describing himself as a "graphic art professional" in his LinkedIn profile. After attending the Ipsia of Assisi, he studied at the University of Maryland majoring in English language and literature.

The middle-aged Italian national had used the internet to voice his frustration with his situation while also seeking help from the Italian embassy. He uploaded videos on the streaming platform Vimeo in which he recounted his experience as a homeless person in Japan and related problems to the failure to regularize his visa for which he blamed his wife.

Foreigners without a residency permit who are unable to obtain a visa extension usually face two paths, repatriation or detention. In 2020, some 5,450 foreigners were repatriated, while 3,378 received an extraordinary extension of their fixed-term residence permit. Those who cannot get an extension to their visa end up in the infamous immigration detention centers.

There are currently 164 foreigners detained throughout the country; in Tokyo alone, there are 43, mostly from Nigeria, Brazil, Iran and China. In Osaka, there are 21 prisoners, of which more than half are Vietnamese.

In past years there have been numerous protests by humanitarian groups (such as 'Bond' which originated from an initiative of university students and the 'Nyukan Alliance') against the infamous shutsu-nyukoku zairyu-kanrikyoku, the immigration detention facilities in Japan, due to the mistreatment that often led to the death of inmates. The Italian is the 18th person to have died in Japan’s immigration facilities since 2007. Six of these may have died by suicide.

One case which stirred international media attention in recent years was that of 33-year-old Wishma Sandamali from Sri Lanka. She set foot in Japan in 2017 on a student visa, but a couple of years later she found herself in a Kafkaesque situation. She had gone to the police to report abuse and violence by her boyfriend. Cases of foreign women from developing countries, especially Muslim countries, who denounce violence from a partner of the same nationality are not rare in Japan.

Instead of focusing on her as a victim, the police regarded her as a criminal. Her residency permit was found to have expired. In August 2020, during the pandemic, she was detained at an immigration facility in Nagoya.

Wishma later died in the detention center after suffering for a whole month from various ailments, including vomiting and stomach pain, for which she never received any treatment despite desperately asking for it, according to her family.

Her mother and sister filed a criminal complaint with the prosecutor's office, accusing the officials of murder and failing to provide adequate medical care. The complaint was filed against the director and deputy director of the facility, as well as against the officers in charge of her safety inside the center. Protests were organized all over Japan to coincide with Wishma's funeral.

A month later, the prosecutors dropped the charges altogether against the accused officials, claiming they could not find any connection between the victim's treatment at the facility and her death.

The sad story occurred at a time when the Diet was deliberating a bill with the intent to review the Immigration Control and Refugee Recognition Act, which would have allowed for faster expulsion of asylum seekers. Japan currently rejects as many as 99.6 percent of asylum applications.

Since April, daily sit-ins have also been organized protesting this bill in front of the Diet in Tokyo. The final goal is the withdrawal of the bill, and therefore over 100,000 signatures have been collected and handed over to the Ministry of Justice.

The ultimate goal of Japan is trying to find the right balance between keeping an open mind on immigration, lest it runs out of employees willing to fill critical positions in key areas like the high-tech industry, while on the other hand, the highly conservative Japanese political class, even those who publicly may claim otherwise, continues to see foreign laborers as an eroding force, corroding the vital national identity from within.

What we usually refer to as racism is often an exaggeration due to the fact that the word pays a heavy price for its own recent history, with a connotation that reminds us of violent conquests, enemy humiliation and utter atrocities.

Japanese, probably more than any other nationalities, suffer from what is technically called a strong in-group bias, which is a tendency to give preferential treatment to someone they see as “their own.” This is a less controversial definition of their historically closed-minded attitude towards foreigners and one that even they will accept as a tangible truth.