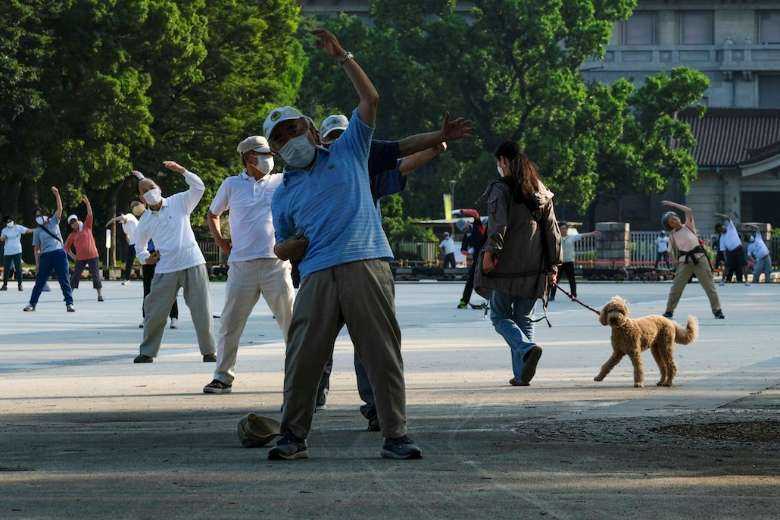 People take part in a morning 'radio taiso' exercise at a park in Tokyo. Japan has passed another milestone in its history of political correctness. (Photo: AFP)

Japan is the land of mascots, manga and illustrations, so much so that they are used everywhere for every conceivable purpose — to promote trade fairs, sporting events, small and large tourist destinations and, of course, the Olympics.

Hello Kitty stickers carry warning signs stating “Protect fingers, keep away from doors!” on commuter train doors. Even the Self-Defense Force and police headquarters have their own mascots. We can come across campaigns that use characters against drug abuse and organized crime.

But illustrations also have a crime deterrent objective, like the kabuki eye stickers attached to the sides of buses and house gates to warn off possible attackers or robbers (“We are watching you!”).

Then just a week ago an illustration in Mie prefecture appeared. It depicts three foreigners who either have no residency status or are falsely pretending to have a "cook" or "study abroad" visa status while working as construction workers or hostesses. Those who live in Japan know that this is common practice. There are agencies in those countries working at this very moment to make sure that a Filipino club hostess or a Vietnamese oyster picker can enter the country legally for a few months to a year and then literally disappear to go work on the black market.

Not only that. As of June 2019, more than 367,000 laborers were in Japan as part of the state-sponsored Technical Intern Training Program. They were employed in a variety of industries including construction, manufacturing and food production.

Every one of them arrived in the country legally. This policy was introduced in 1993 and its intent was to bring in labor from developing countries, teach them a technical skill and then send them home after three years. We could assume, of course, that they were well equipped with the most valuable technical skills.

Where do all these people end up? What if they get injured?

For the trainees, this is a chance to not only earn several times more money than they could back home. It also offers, on paper, the hope for a potential better future thanks to the proficiency in the skill so attained.

According to the Immigration Services Agency, 9,052 foreign trainees went missing in 2018, nearly double the figure from 2014. That’s the size of a medium Japanese village.

Everybody would agree that there is a problem to solve here. Where do all these people end up? What if they get injured? How can they survive in a country like Japan with such a high cost of health care without insurance?

According to the prefectural police of Mie who came up with the idea of that illustration, it was used for public relations purposes. Meaning expanding awareness of a problem that is foremost harmful to those very same foreigners represented in the illustration.

But when the knowledge of this initiative hit social media, angry posts critical of the design spread like fire with comments such as "It's based on a discriminatory mindset against foreigners" and "I feel there is a malicious intent."

Even though the prefectural police justified themselves saying they used an easy-to-understand illustration to convey a simple message, in the end they removed it because “if even one person feels uncomfortable, it means it was not appropriate."

Mie prefecture capitulated because someone felt the illustration was discriminating against foreigners, making all foreigners look like criminals.

In truth, in giving up so quickly to critics, Mie prefecture has gone counter to the initial intent of the campaign. And that is, don't discriminate against the foreigners but raise awareness of a problem so that more foreigners could not be exploited.

This is a fact and everyone knows it. A year ago NHK was able to track down and talk to a few of these escaped workers. Three young men from a Southeast Asian country were sent to a farm in Nagano in 2018 as part of the national program.

They told Japan’s national broadcaster they were forced to work from 2am to 5pm and their overtime pay was well below what they had been told. After six months of these conditions, the three decided to run away. Despite barely speaking Japanese, they relied on a network of foreign friends and traveled to Kyoto where they found work.

But things only got worse. Hired by a small construction company, they were forced to work from 6pm until 11am the next day. They say they received almost no payment for their labor.

This is another milestone in the history of political correctness in this country. An initiative with just intent and a real concrete objective was torn apart by people sitting comfortably in their homes while distractedly reading headlines and suddenly feeling a burst of radical revolt in the defense of someone whose real situation and struggles they literally cannot fathom.