Motivated by the devastating Fukushima accident, the bishops wrote a book arguing for a safer world An English version of a book by Japan’s bishops appealing for the abolition of nuclear power is now available for free on the internet.

Abolition of Nuclear Power: An Appeal from the Catholic Church in Japan is available as a PDF file on the website of the Catholic Bishops’ Conference of Japan.

The bishops decided to write the book after Japan's Fukushima Daiichi Nuclear Power Station suffered a serious accident including a meltdown after an earthquake and tsunami on March 11, 2011.

The bishops of Japan concluded that nuclear power generation should be immediately abolished in the face of the insoluble dangers it presents, including widespread health damage to children.

They worked with researchers in various fields to explore the damage caused by the Fukushima accident, the technical and sociological limitations of nuclear power production, and ethical and theological considerations concerning it.

The bishops believe that Japan, having suffered such a severe nuclear accident, has a responsibility to inform the world of the reality of the damage and to appeal for the abolition of nuclear power generation.

Once a severe accident occurs, they argue, nuclear power generation destroys the environment over a wide area for generations and damages the right to life and livelihood.

Nuclear power is essentially incompatible with the image of the earth as a symbiotic society, which Pope Francis shows in his encyclical Laudato Si’, the bishops say.

In November 2019, the pope visited Japan and met with victims of the earthquake and Fukushima accident. During an in-flight press conference while returning to Rome, he said: “A nuclear disaster from a nuclear plant will be a huge disaster. And safety measures have not yet been developed.”

The pope’s comment reinforced the Japanese bishops’ desire to make their book available internationally. They hope that their proposed elimination of nuclear power generation will be discussed as an important issue for the sustainability of the earth. 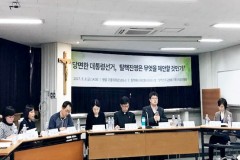