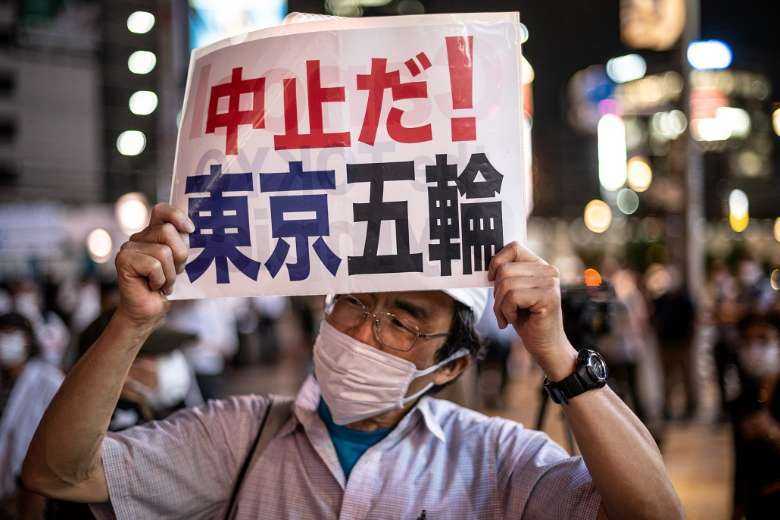 A man holds a slogan calling for the cancellation of the Tokyo 2020 Olympics during a march from the metropolitan government building, 30 days before the opening ceremonies, in Tokyo on June 23. (Photo: AFP)

When Tokyo won the 2020 Olympic Games in 2013, it had the support of 70 percent of the population. In the latest polls, only 14 out of 100 Japanese say they are in favor of holding them in July. To put the numbers in perspective, eight out of 10 Japanese are in favor of the death penalty.

But the International Olympic Committee has decided the Games will take place in just a month, starting on July 23, and now that the state of emergency has been lifted, it is going to make a larger collective effort to avoid spikes in infections.

People have already protested against the installation of giant screens in central Tokyo parks to collectively watch the Games, so much so that they have all been canceled. Instead the ground is going to be used to give vaccinations. Izakaya and restaurants are still protesting the semi-restrictions that continue on the sale of alcohol.

Murphy's Law — if something can go wrong, it will — seems to have inspired this sporting event rather than Count de Coubertin's motto that “participation is more important than winning.” At first it was just a matter of postponing the Games from 2020 to 2021. Then it became clear that having foreign spectators could be a problem. And now even the Japanese spectators seem to be too many. Just 10,000 and no decision yet on alcohol.

They struggle even to scrape together the money for ticket refunds. And a few days ago, a senior executive of the Japanese Olympic Committee committed suicide by throwing himself under a train. If there were elections tomorrow and a party presented itself with the slogan "No to the Olympics" (not really science fiction as there is already a party in parliament called No to NHK), it would snatch an avalanche of support. In fact, you can now easily come across one of the opposition party’s posters that scream: “No Olympics!”

Even the Asahi Shinbun, a sponsor of the Five Circles, ran an editorial burying Prime Minister Yoshihide Suga's choice to go ahead and asking him to reconsider. The words used fully reflect the popular mood: if it is theoretically possible to control most of the athletes' movements, as for all the others, success will largely depend on their willingness to "practice self-control." In Japanese it is called jishuku. Which basically means: although I am not obliged so by the law, if I only get a slight sore throat, as a precaution I will lock myself at home for 14 days and eat only what Uber Eats brings me.

With so many variants of Covid around the world, why should we open the doors to tens of thousands of people?

Haruki, the father of a three-year-old girl, is in front of the monument of the Five Circles near the gargantuan National Stadium, which suddenly looks more like a post-apocalyptic wreck. "With so many variants of Covid around the world, why should we open the doors to tens of thousands of people?" he asks.

The dear Olympic spirit (sport has rules and no borders) appears to be redundant at this point. Can the traditional phobia of the foreigner turn into a second epidemic? Even more so that the gaijin themselves are not exactly behaving. A Reuters reporter, after a vacation in December, returned to Tokyo bringing the dreaded UK variant with him. And despite the duty of self-quarantine, he crashed a party, sparking yet another outbreak. But first-hand experience also tells you everything you need to know. During this year and half of emergency by fiat, the category of people who didn’t wear masks were Caucasians.

The governors of many prefectures have clearly stated that they will not be able to provide beds for any "Olympics-related" patients.

The fears stretch beyond the Games. If a new state of emergency is declared in September-October, the already weak economy will be further damaged. Japan is already US$700 billion in debt to sustain the anti-Covid effort, while the Games will now cost $25 billion. Sixty sponsors have invested $2.5 billion in the Olympics. Advertising giant Dentsu, heavily involved in the event, is considering the sale of a 48-storey building in Tokyo worth $2 billion to help restore its accounts.

Until 2019 many brands published daily announcements relating to the Games. Since last year they have suspended every commercial due to the growing anti-Olympic movement: why tie your brand to something everyone hates?

Beyond the surveys, to understand the degree of allergy to the Games, it is necessary to go to Yoyogi Park in Tokyo. "It's a real waste — they wanted to cut the trees in this park to make a public viewing venue for the Games," a pensioner who comes here for a walk every day tells me almost with disgust.

"We can’t hold the Olympics if the quarantine is not imposed like everywhere else," Masaru, 50, says. The most optimistic is a 66-year-old retiree who is stretching in the shade of a cypress. "Holding the Olympics would be an incredible commercial for the country. Everyone would say: you see, only an advanced country like Japan could do the Games during a full pandemic. It would be historic!”

I still don't know whether to have it or not. I think I'll wait to see what the others will be doing

Instead, what’s really historic is that Japan has the highest number of anti-vaxxers among the OECD countries. Just between Tokyo and Osaka, 7,400 over-65s have deserted the call to inoculation. Many Japanese have a suspicion of vaccines and foreign pharmaceutical companies. The last episode dates back to the early 1990s, when some cases of aseptic meningitis were recorded after inoculation that combined measles, mumps and rubella vaccines. Today 35 percent of Japanese who get information through TV, radio or newspapers declare themselves against vaccines. The percentage rises to 50 among those who inquire via social media: one in 10 responds that they do not want to be injected with ibutsu, a generic term for "foreign substances."

Among these is Kenta, who has been in Shibuya for weeks with a small group of anti-vaxxers. He says administering a vaccine means genetically modifying the body and serious side-effects can occur even in 10 or 20 years. Is the coronavirus really that dangerous?

Miho, 31, who listens to the conspiracy theories, is undecided where the truth lies. “I still don't know whether to have it or not. I think I'll wait to see what the others will be doing,” she says. And this is by far the most common, and typical, Japanese attitude. Wait patiently to see what everybody else will do. In Japan, herd immunity has a whole other meaning.