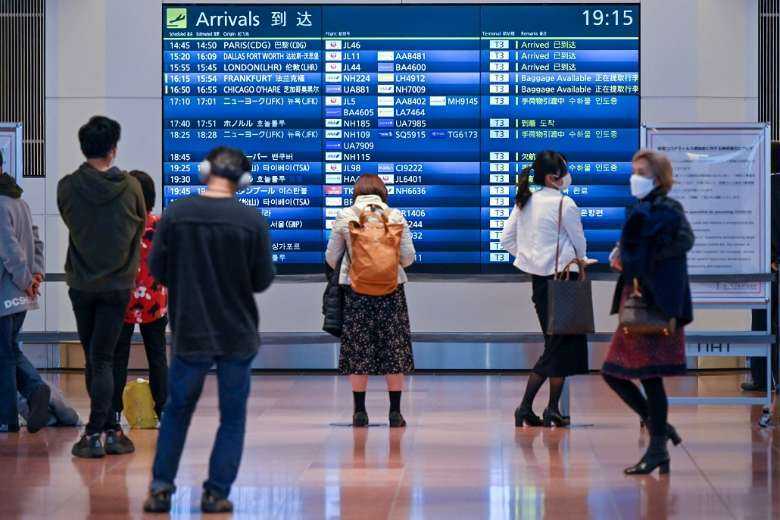 People wearing masks stand in front of the arrivals board at Tokyo's Haneda International Airport on Dec. 1 as Japan suspended all flights into the country in response to the Omicron Covid variant. (Photo: AFP)

Doctors are still arguing whether face masks protect us from Covid but we know one thing for sure — we are not going to get rid of them easily.

In Japan, where people used them even before the pandemic hit and even with the current low infection level, the wearing of masks in school has become such a natural habit as to be considered a part of the seifuku (uniform) itself; in the local jargon they are known as “face-pants,” meaning you can't leave the house without one without feeling ashamed.

Yuki, a 21-year-old student from Mitaka, can only see the upside of the medical item. “The mask has a double positive effect for me,” he said. “If I wear one, it’s hard to read my facial expression, therefore if I don’t feel like talking it prevents people from approaching me. Also, when I’m in class even if the teacher gets angry with me, I don’t feel so ashamed after all," he said with a chuckle.

Yuki is not alone. According to a national survey, 25 percent of respondents answered that they will definitely continue wearing a mask even after the pandemic is over. For most Japanese, hiding the face alleviates interpersonal anxiety.

"If I wear a mask, I feel I gain some points aesthetically. You don't want to disappoint other people by removing it,” said Sakura, a young office worker in Shibuya, adding that she has no intention of removing her mask after the pandemic.

She joined her company after the virus hit, so she has spent almost two years without having the opportunity to show her face to her colleagues or see their faces. “Not knowing how they all look like somehow makes relationships easier.” She said she felt strange when she glimpsed her colleague’s face during lunch, worried that other people will have the same reaction to her.

The moment I took off my mask to bring food to my mouth, I heard a nasty laugh. From that point on, I'm afraid of being judged and therefore hurt by strangers

An online comment that went viral said: “I don't have the courage anymore to expose my face outside. Two months ago, I felt two guys were watching me while eating out. The moment I took off my mask to bring food to my mouth, I heard a nasty laugh. From that point on, I'm afraid of being judged and therefore hurt by strangers. A mask is fine for the rest of my life.”

Tatsuji Tamura, a doctor at Naka Ward Mental Clinic, pointed out that young people's dependence on masks is a part of the “face-to-face communication problem” common among young people. It seems that it is becoming a new modern illness for the “TikTok generation” who haven’t been able to acquire the skills necessary for direct physical communication.

“Covering your face to protect yourself is a way to cover the lack of self-confidence,” said Dr. Tamura. After the pandemic goes away, the doctor predicts that voluntary wearing of masks will take hold.

It’s even worse for children. According to a team of Italian professors of plastic surgery who wrote a paper titled "Can the Elastic of Surgical Face Masks Stimulate Ear Protrusion in Children?" published in June 2020, the prolonged pressure from the straps could leave young children with permanently protruding ears.

Even more detrimental to their growth is that by hiding people’s lips and muffling their speech, mask wearing would make it harder for young children to develop linguistic skills and will impede children with hearing disabilities from lip reading. Unable to rely on facial cues, younger people run the risk of misinterpreting others for the rest of their lives, and this is particularly true for children with autism.

A team of researchers from the University of Witten/Herdecke in Germany asked nearly 18,000 parents to report the side effects of mask wearing on their children. More than half reported that the masks were giving their sons and daughters headaches and making it difficult for them to concentrate. More than one third spoke of other side effects including reluctance to go to school, unhappiness, impaired learning, drowsiness and fatigue.

A famous law devised by Dr. Albert Mehrabian, an American psychologist, established which information we give priority to when communicating — the information itself (language), facial expressions (visual) or the voice quality (auditory). After repeated experiments the results were that language is only relevant at around 7 percent, while the visual and auditory aspects are more important at 55 percent and 38 percent respectively.

In other words, more than 90 percent of non-verbal information such as appearance and tone of the voice is prioritized over the content.  If you wear a mask, the facial expression will be half hidden and the amount of visual information will be halved. The voice is muffled and the subtle nuances cannot be heard.

Ultimately, we must ask ourselves, as the most longstanding criticism of the younger generation has been their inability to communicate their emotions in a face-to-face context, are we sure that by giving them another tool to impair the quality of their interaction we aren’t hampering their future growth and barely doing any good for their present?