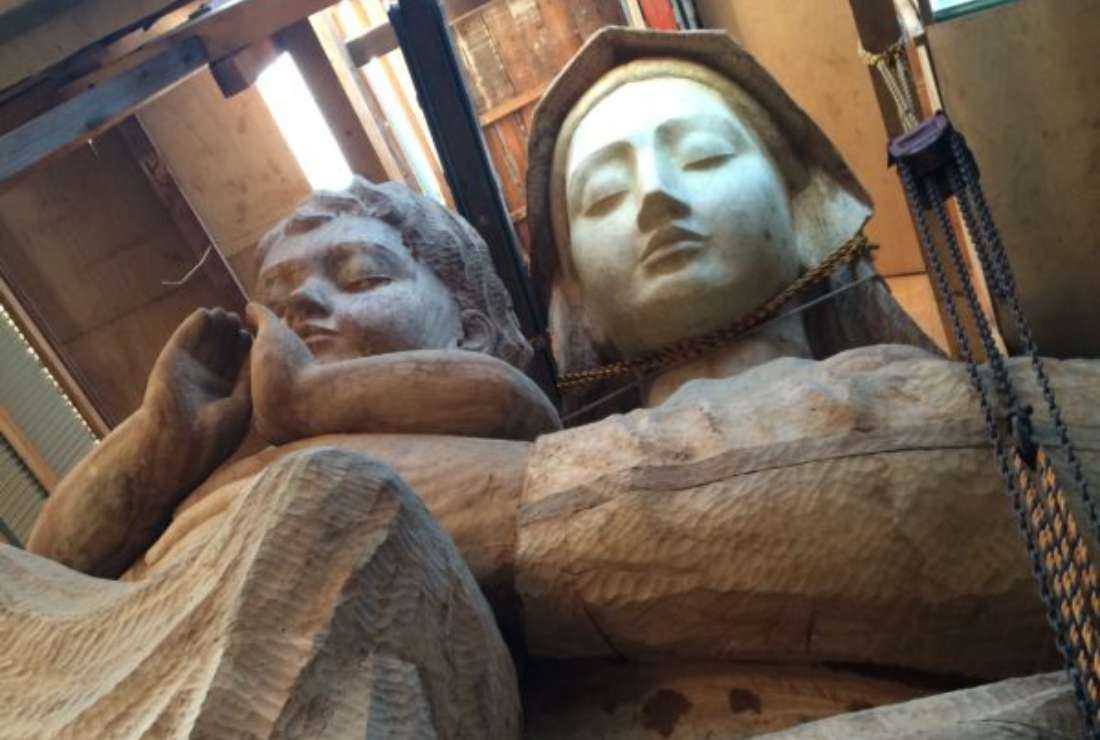 An elderly Catholic sculptor in Nagasaki, Japan, is all set to complete and install the world’s tallest wooden statue of the Virgin Mary after four decades of time, energy and money.

Eiji Oyamatsu, 88, a Catholic from Fujisawa, Kanagawa prefecture, will unveil the 10-meter wooden statue of Mary with the child Jesus at the end of June, reported Japanese newspaper Asahi Shimbun.

The statue pays tribute to thousands of Christian martyrs of Nagasaki in the 17th century.

The single-handed effort by Oyamatsu encouraged a group of volunteers to form the Citizens’ Association for Minami-Shimabara World Heritage in 2018. The group from Nagasaki prefecture has bought land to install the statue to honor the martyrs of the Shimabara-Amakusa Rebellion, aiming to turn the site into a popular shrine.

The revolt, mostly by local Catholic peasants, stemmed from grievances over excessive taxation and abuses by officials of the Shimabara peninsula and the Amakusa-retto islands. It was brutally crushed by the 120,000-strong army of the military government of the Tokugawa Shogunate. The suppression between 1637 and 1638 left about 37,000 Christians dead and effectively ended Christianity in Japan until its revival in the 19th century.

The purge forced all remaining Christians to renounce their faith publicly. However, many Christians continued to practice their faith secretly and came to be known in modern times as kakure kirishitan (hidden Christians).

“It seems fateful that I set about this work without being commissioned by anybody, and the statue will now be hosted in a place that deserves it the most”

Oyamatsu said he first thought about the statue following his visit to the remains of Hara Castle in 1971 and was shocked to see there was no memorial dedicated to the martyrs of the Shimabara-Amakusa uprising.

Hara Castle, now a World Heritage Site, was a castle where numerous Catholic peasants took refuge to escape atrocities by invading forces, but most died in bombardments.

“It seems fateful that I set about this work without being commissioned by anybody, and the statue will now be hosted in a place that deserves it the most,” the sculptor said.

The display is due to open to the public in March 2023.

Oyamatsu stated work on the statue after Pope John Paul II visited Nagasaki in 1981. He gifted a small statue of the Virgin Mary to the pope, who sent him a letter with blessings and prayers for his work. It motivated him to scale up the planned statue.

His first model statue was 50 centimeters tall, and he then gradually scaled up the size to 2.5 meters, 5 meters and finally 9.5 meters.

Since carving such a large statue from a single piece of wood was not possible, the sculptor has used the log-house method to assemble the statue. He has interlinked circular pieces of camphor wood. The pedestal of the statue is 2.5 meters wide and 3 metres tall.

Though the award-winning sculptor remains busy with many things every day, he makes time to work on his dream project, even sacrificing his sleep.

On various occasions he has rejected assistance from residents of Minami-Shimabara. “I want to see how far I can go with my abilities. A climber wouldn’t have much fun if he were to take a helicopter to the summit, right?”

Oyamatsu was bestowed the Prime Minister’s Award for his work Shunrai (Spring Thunder) at the 43rd Japan Fine Arts Exhibition in 2011.

His mentors were Takashi Shimizu and Choshu Hashimoto, both prominent sculptors of their time. He graduated from the School of Sculpture at Musashino Art University in 1961.

According to church records, Catholicism came to Japan after Portuguese explorers established a sea route to Asia in 1498. It is believed Portuguese missionaries brought Catholicism to Japan in 1543.

The arrival of Jesuit missionary St. Francis Xavier in Kagoshima in 1549 augmented Catholicism in the country. More missionaries soon followed his footsteps and evangelized in the country when it was ruled by a feudal system.

Several feudal lords and their subjects converted to Catholicism and the faith continued to flourish in the late 16th century before facing hostility from military rulers.

During the rule of daimyo (feudal lord) Toyotomi Hideyoshi (1585-98), an order was issued to expel all Catholic missionaries. Some 137 churches were destroyed.

The worst case of persecution occurred in 1597 when 26 Catholics including six Franciscan friars were executed by crucifixion in Nagasaki. In 1865, the Church opened the minor basilica of the Twenty-Six Holy Martyrs of Japan to honor the sacrifices of the martyred Christians.

“We were deeply moved by the earnest feelings of the artist. And the more you look, the more you realize it’s a wonderful work. We want to host the statue here in Minami-Shimabara at any price”

The ban on Christianity was lifted in 1853 but evangelization was forbidden. In 1873, the Meiji government finally lifted the ban on proselytization due largely to pressure from Western nations. As of 2019, Japan had 540,496 Catholics in 16 dioceses.

In 2015, Oyamatsu decided to donate the sculpture to the Minami-Shimabara city government when completed. But he met with opposition from some citizens who said the move would violate Japan’s policy of separating religion and politics.

However, when in 2018 UNESCO listed sites related to hidden Christians in Nagasaki and the Amakusa region as World Heritage Sites, including the remains of Hara Castle and a cathedral, it sparked renewed interest in Christianity among residents.

This led to the formation of the Citizens’ Association for Minami-Shimabara World Heritage which launched a donation drive for a proper location and shelter for the statue.

“We were deeply moved by the earnest feelings of the artist,” said an official with the association’s secretariat. “And the more you look, the more you realize it’s a wonderful work. We want to host the statue here in Minami-Shimabara at any price.”

The land development and construction of a tower on a hillock to house the statue started earlier this year. The association has so far secured funding of 30 million yen (US$22,200) for the initiative.

Once the site is ready, Oyamatsu plans to assemble the statue on-site with anti-earthquake measures, final changes and painting. The final phase of the work is expected to be completed in three months.

“I am still nervous because some parts may not fit when they are assembled on-site,” the sculptor told Asahi Shimbun. “Far from feeling relieved that the hardest part of the work is over, I have a prickling pain in my stomach.”