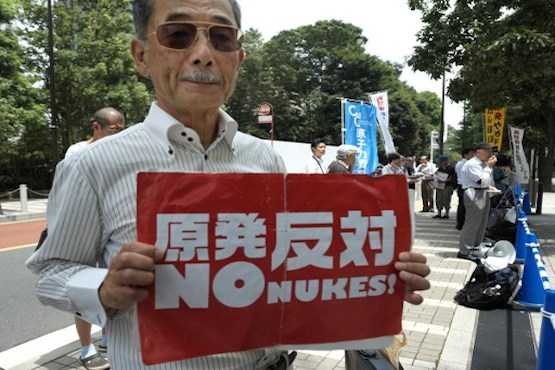 A man shows an anti-nuclear placard at a rally to protest against re-operation of a nuclear power plant in front of the Nuclear Regulation Authority in Tokyo on July 8, 2016. (Photo by AFP)

The bishops' conference of Japan has issued a statement calling for the worldwide abolition of nuclear power, five and a half years after the Fukushima Daiichi nuclear disaster.

The Catholic Bishops’ Conference of Japan (CBCJ) issued their statement, On the Abolition of Nuclear Power Generation: A Call by the Catholic Church in Japan, on Nov. 11.

"We, the CBCJ, appeal to all people who share a common home called Earth that we join hands, rise together and act in solidarity to end nuclear power generation," the statement said.

"For that purpose, we turn first to the Catholic Church throughout the world, seeking cooperation and solidarity. While it may be unusual for the bishops’ conference of a single country to direct a statement to the entire world, what Japan has experienced in the five and a half years since the Fukushima disaster convinces us that we must inform the world of the hazards of nuclear power generation and appeal for its abolition."

The CBCJ published English, German and Korean translations of the message on its website. They also condemned the Japanese government’s pro-nuclear stance.

The bishops also published a 290-page book in October that demonstrates the philosophical basis of their opposition.

Their outreach comes soon after a 7.4-magnitude earthquake hit the same area as the 2011 meltdown on Nov. 22. It caused a tsunami as high as two meters. A cooling system in a nuclear power plant in Fukushima was knocked out of service for over an hour.

The 2011 Fukushima disaster was the worst nuclear accident since Chernobyl. A huge tsunami hit the facility causing three reactors to melt down and release nuclear material. Up to 640 people could die from radiation-related cancer, according to one study.