Archbishop Tarcisio Isao Kikuchi of Tokyo points to a map of Myanmar as he visits the Myanmar Peace Wishing Photo Exhibition in Tokyo on April 23. (Photo: Archdiocese of Tokyo)

Archbishop Tarcisio Isao Kikuchi of Tokyo has visited a photo exhibition on Myanmar, expressed sympathy for people struggling for democracy and prayed for peace in the conflict-torn country.

He paid a visit to the Myanmar Peace Wishing Photo Exhibition at the Cologne Hall of the Sekiguchi Kaikan in Tokyo on April 23, according to a press release from Tokyo Archdiocese.

The exhibition being held from April 22-28 has been organized by the Society for the Support of Burma, a Japan-based advocacy group for Myanmar.

With the theme “Uniting in Prayer for Peace in Myanmar,” the exhibition features photos and maps of the Southeast Asian country with a special focus on the life and struggles of detained political leader Aung San Suu Kyi.

Pointing to the map of Myanmar, the prelate said that for years Tokyo Archdiocese has been supporting the Catholic seminary in Mandalay, the second largest city in Myanmar.

At the end of the visit, Archbishop Kikuchi wrote a special message with a call for prayer for peace in Myanmar in the visitors' book.

His follows his earlier call for prayer for peace in the military-ruled country.

The prelates joined Cardinal Charles Bo of Yangon to express solidarity with Myanmar's people and to promise to pray for the nation after a deadly crackdown on anti-coup protesters that has left more than 700 dead. 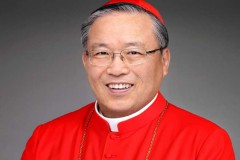 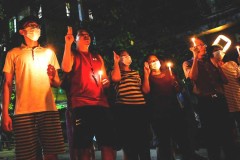 Church leaders dedicated April 1 the Day of Prayer for Democratization and Peace in Myanmar with a strong call for the return of democracy in the country.

A special intercessory prayer was recited in parishes of Tokyo, Cologne, New York and Regensburg as follows: “Pray for Myanmar's brothers and sisters in crisis in their homeland. May justice and dialogue overcome the darkness and division that is now covering Myanmar. May everyone work together to build a community of true reconciliation, full of hope and peace. Listen to our prayers, Lord.”

Archbishop Kikuchi had pledged his prayer support in a personal letter to the bishops in Myanmar: “I would like to assure you of our prayer in solidarity with the Church of Myanmar, her role in serving the weak and her striving for peace.”