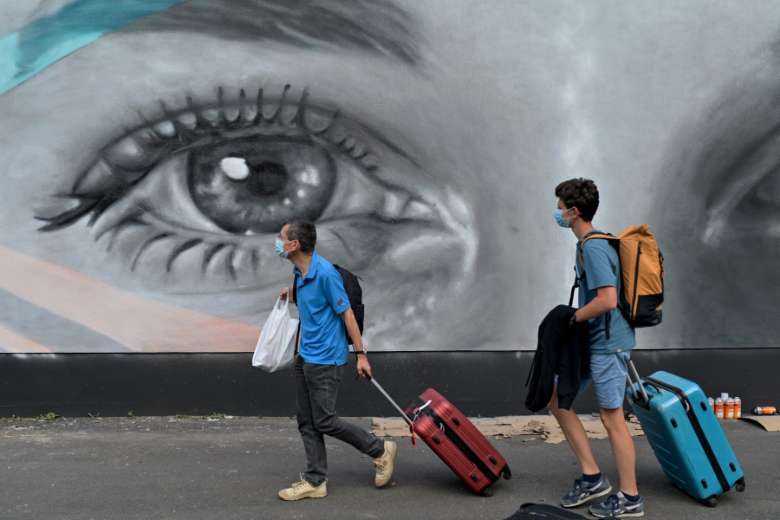 Travelers walk past a mural by French street artist Rebeb depicting the eyes of missing Tiphaine Veron to mark the third anniversary of her disappearance in Japan, near the train station in Poitiers, Western France, on July 29. (Photo: AFP)

"We will ban the [new] entry of foreigners from around the world starting from November 30," Kishida told reporters.

Japan's borders have been almost entirely shut to new overseas visitors for most of the pandemic, with even foreign residents at one point unable to enter the country.

In early November, the government announced it would finally allow some short-term business travelers, foreign students and other visa holders to enter the country while continuing to bar tourists.

Around 370,000 visa holders are waiting to enter Japan and will be gradually let in, according to local media.

Tokyo had already announced on Nov. 26 that it would require travelers permitted to enter Japan from six southern African countries to quarantine in government-designated facilities for 10 days on arrival. The step was expanded to a total of nine countries over the weekend.

Kishida said today that further quarantine restrictions would be imposed on arrivals from an additional 14 countries and regions where the variant has been detected, without giving further details.

The prime minister said Japan is "in a stronger position against the Omicron variant than other countries," citing voluntary mask-wearing and self-restraints about risk behaviours.

Japan has recorded just over 18,300 coronavirus deaths during the pandemic while avoiding tough lockdowns. After a slow start, the country's vaccination programme picked up speed, with 76.5 percent of the population now fully inoculated.

It has not detected any Omnicron cases but the National Institute of Infectious Diseases is analysing a case of a traveler from Namibia who recently tested positive for the coronavirus.