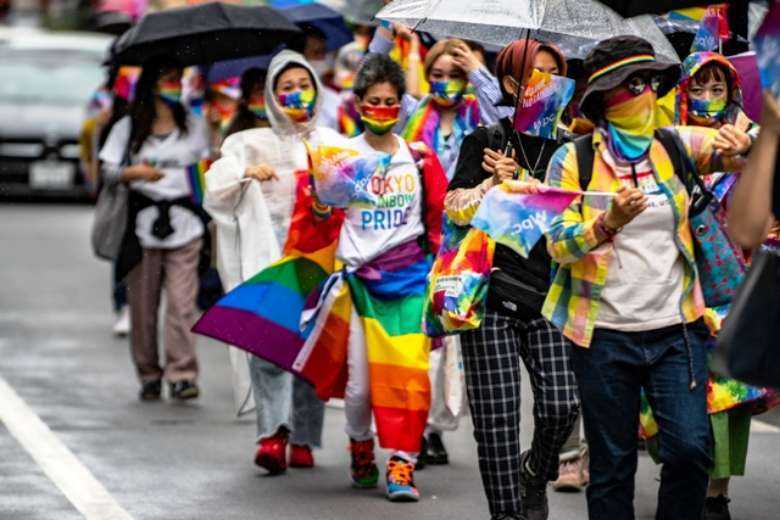 Japan is catching up with its G-7 counterparts to make life civil and gracious for same-sex couples in the predominantly Buddhist country. The national capital Tokyo becomes the ninth among the country’s 47 prefectures to recognize same-sex partnership this month.

The move by the Tokyo government is aimed at making available civic services to married couples of the lesbian, gay, bisexual, transgender and queer (LGBTQ) community. The gesture by the government will reduce the ambiguity about which sex a person is.

There are many takers for the partnership certificates in Tokyo and not less than around 8,300 comments were received by the Tokyo government after it solicited opinions on the same-sex partnership system for about two months through April.

"We collected opinions from the public for the past two months and we heard opinions (from same-sex couples) who said they want to be recognized as partners," a Tokyo government spokesman told AFP.

In Japan, the only G-7 nation that does not recognize same-sex unions, nearly 200 municipalities, or about 12 percent of the total, have issued legally binding certificates to same-sex couples.

Shibuya district in Tokyo, a popular entertainment and shopping hub, became the first in Japan to issue partnership certificates to same-sex couples in 2015.

However, a number of LGBTQ couples have moved courts for the right to marry and a district court last year ruled that failure to recognize same-sex marriage was unconstitutional.  The country’s constitution stipulates that "marriage shall be only with the mutual consent of both sexes."

Though the landmark ruling was seen as largely symbolic, it came just days after the Vatican banned its clerics from blessing same-sex unions.

Additionally, Japan’s gender laws require transpeople to undergo surgery and sterilization to be legally fit before they can change their gender — which has been termed by international medical experts and human rights groups as inhumane.

The move by the Tokyo government, which will come into force this October, allows non-Japanese nationals, who meet the requirements, to apply for the certificate under the Tokyo Partnership Oath System. Transpeople with children have the option to include them on the certificate.

To be eligible to possess the certificate, at least one partner needs to be a sexual minority and should either stay or work in Tokyo and both should be legal adults.

Under the draft bill, proposed on May 10, transpeople can apply for municipal housing and give consent for the surgery to be performed on their partner.  The whole application process is routed online to protect privacy and will get the nod from authorities within 10 days.

The purpose is “to reduce inconveniences in daily lives surrounding sexual minorities,” the Tokyo government said in a statement after the draft bill was proposed.

In Japan, same-sex culture was slow to make progress as the religion does not sanction it in its androcentri society. Though gay celebrities are visible in the mainstream entertainment world, the recognition of LGBTQ rights lags behind its G7 counterparts like the US, Canada, UK, France, Italy and Germany.

Japan’s failure to catch up with its Western counterparts is because there existed no concept in the earlier society on women’s same-sex love and there was no way of cognitively linking both male and female “homosexuality.”

Though there were many instances of nanshoku (male eroticism) in the country, women’s same-sex love was not given the same level of moral standing as that between men in literary and artistic references and in actual life.

Though considered pathological, women’s crushes on women were not taken seriously as they were regarded as asexual and temporary aberrations, something the girls would outgrow later as they grew up.

In the middle of the 1990s, Japan’s same-sex culture achieved more freedom and the first commercial magazine aimed at lesbian and bisexual women was released. Since then there has been no looking back. But progress has been tardy compared with its Western counterparts.

Global rights groups have been active to get full civil rights for same-sex couples. Recently, they wanted an equality act ahead of last summer's Tokyo Olympics to improve Japan’s international standing and to get an Olympic legacy, but the bill was turned down by Prime Minister Fumio Kishida’s conservative Liberal Democratic Party (LDP). The party was also against any legislative changes at the national level to recognize same-sex unions.

There are already allegations in the international business world that not allowing same-sex marriage hurts Japan’s competitive advantage as companies, especially foreign firms fail to attract and keep highly-skilled labor in an increasingly globalized economy.

With the new proposal by the Tokyo government, the day is not far away for Asia’s second-largest economy to consider that gender and biological sex are entirely separate and biology stops with anatomy.