An empress is not an alien concept in Japan, with the imperial family itself said to be descended from the sun goddess 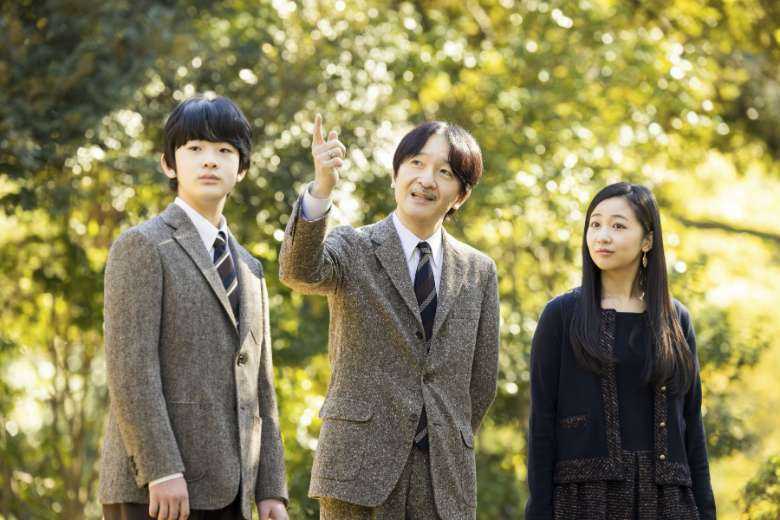 This handout file picture taken on November 12, 2021 and provided by Japan's Imperial Household Agency on November 30, 2021 shows Japan’s Crown Prince Akishino (C) strolling with his son Prince Hisahito (L) and his daughter Kako (R) in the garden of their Akasaka imperial property residence in Tokyo, ahead of his 56th birthday on November 30. (Photo: AFP)

Japan's imperial family is facing extinction due to a shortage of eligible emperors, but some experts say the ideas floated in a government inquiry for boosting the dwindling number of royals are out of touch.

With women barred from the throne under male-only succession rules, the place of Emperor Naruhito, 61, will one day be filled by his nephew Prince Hisahito instead of his only child Princess Aiko.

But if 15-year-old Hisahito does not have a son, the royal family, whose history dates back more than 2,600 years, will run out of male heirs to continue the bloodline.

Polls show the public broadly supports the idea of a woman taking the role of emperor -- one that holds no political power under Japan's post-World War II constitution but carries huge symbolic importance.

However, pressure to stick to long-held tradition from conservative lawmakers and voters, who revere the royals as the perfect example of a patriarchal Japanese family, makes female succession unlikely any time soon.

Officials are brainstorming possible solutions to the dilemma, and last week a specially commissioned panel submitted two suggestions to the government.

One is to allow royal women to keep their title and public duties when they wed outside the family. Currently, they must leave the family, as former princess Mako Komuro did in October after marrying her university sweetheart.

The second is to allow men from 11 former branches of the royal family abolished in post-war reforms to "rejoin" the direct line through adoption.

But its ideas are "not at all based on the current family system in Japan or ideas about gender equality", Makoto Okawa, a history professor at Chuo University in Tokyo, told AFP.

"I think the public is wondering what's wrong with Princess Aiko succeeding the throne," said Okawa, who researches the imperial system.

Although traditionalists say Japan should not sever the "unbroken imperial line", their logic is flawed, Okawa argued, because Aiko -- who turned 20 this year -- is both the emperor's direct descendent and older than her cousin Hisahito.

Hideya Kawanishi, associate professor of Japanese history at Nagoya University, warned that the panel's proposals "will not solve the problem fundamentally".

Some married women might not want to live a restricted royal life, while the adoption of male family members who grew up as regular citizens would be complicated, he said.

The issue has been debated for years -- after Aiko was born, a government panel concluded in 2005 that imperial succession should be decided in order of age and not gender.

However, these discussions lost momentum after Hisahito's birth in 2006, meaning the male bloodline could continue.

The latest panel report said it was necessary to discuss possible changes to succession rules in the future but, unlike in 2005, did not use the words "female emperor".

This means that for the wives of male royals like Hisahito, "there will be pressure to conceive boys to keep the line going," Kawanishi said.

Royal women have long walked a difficult path in Japan.

Naruhito's wife Masako, a former high-flying diplomat, struggled for years with a stress-related illness after joining the household, which some have put down to the pressure of producing a male heir.

Mako and her husband Kei Komuro, both 30, were plagued by tabloid gossip over allegations that Kei's family had run into financial difficulties, leading the former princess to develop complex post-traumatic stress disorder.

An empress is not an alien concept in Japan, with the imperial family itself said to be descended from the legendary sun goddess Amaterasu.

There have been as many as eight empresses throughout history, although their rule has often been temporary. The last, Gosakuramachi, was on the throne about 250 years ago.

The divine status of the imperial family was renounced after World War II following Japan's militaristic sweep across Asia in the name of Emperor Hirohito.

Since 1947, royal succession has been dictated by the Imperial Household Law, and issues surrounding it remain a delicate topic tightly bound with ideas of national identity.

Nowadays, politicians are "scared of changing the system" while they are in office, Kawanishi said.

But after Mako's wedding garnered huge attention, one way the debate could be pushed forward is "if the public becomes more interested in the subject, and pushes for discussions", he said.