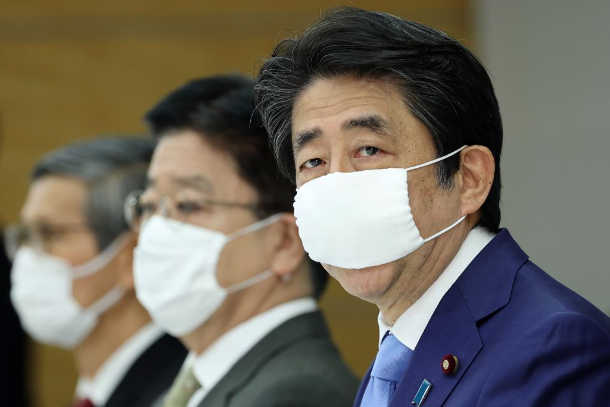 Prime Minister Shinzo Abe attends a meeting of Japan's Covid-19 task force on May 4 before announcing that a state of emergency would be extended until the end of May. (Photo: AFP)

Japan has extended its national emergency until the end of May to prevent the spread of the coronavirus pandemic following the recommendation of a government panel of medical experts.

The government has notified parliament of its plan to prolong the emergency to prevent a surge in infections that would place additional strain on hospitals.

The extension of the emergency on May 4 comes amid fears that a surge in infections could put an already stretched healthcare system out of gear. Medical professionals have warned of an already strained system, with hospitals in major cities like Osaka even seeking donations of raincoats for health workers after they ran out of protective gear. The administration now sends Covid-19 patients with mild symptoms to hotels, converted into quarantine centers, rather than admitting them to cramped hospitals. The extension of the emergency came as people were expecting relaxations in restrictions around the Golden Week of April 29 to May 6 when several national holidays are celebrated. The extension also comes amid Asia's second-largest economy experiencing business closures.

Yasutoshi Nishimura, economic revitalization minister, told reporters after the advisory panel's meeting that some of the current restrictions on social and economic activities will be eased in areas that have reported fewer cases. Parks, libraries and museums may be permitted to open after putting in place preventive steps.

Last week Prime Minister Shinzo Abe hinted that a return to normalcy would not come soon.

On April 7, Abe announced the state month-long state of emergency for seven prefectures including capital Tokyo and major cities Osaka and Fukuoka.

The emergency was expanded to the entire nation on April 16 to pre-empt an expected rush in travel during the week-long holiday period when the Japanese typically visit their hometowns.

Japan's emergency, declared based on a law passed in March, allows shopping for essential items, hospital visits, exercise and going for walks.

The new law empowered the government to declare an emergency when the country's capacity to provide medical care reaches its limit.

Japan' s state of emergency is significantly less restrictive than in parts of Europe and the United States. It allows governors to urge
people to stay at home and call on businesses to remain shut. But officials cannot compel citizens to comply, and there are no punishments for those who fail to do so. Rural Japan has been largely saved from the worst of the novel coronavirus, Kyodo news agency reported. While more than 4,500 confirmed cases have been reported in Tokyo, the epicenter of the outbreak in the country, most prefectures have
witnessed fewer than 100 cases.