Japan comes under fire for pandering to Myanmar 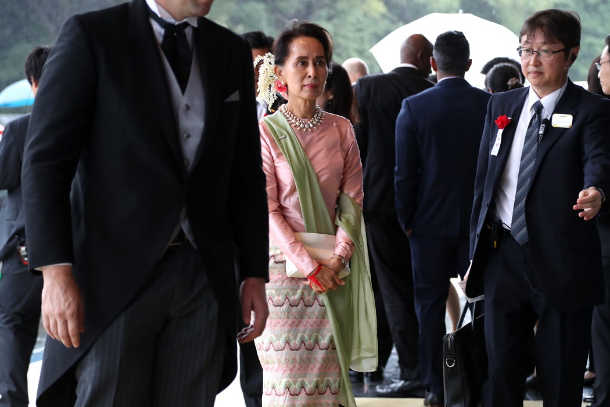 Rights groups have urged Japan to hold Myanmar to account for atrocities against Rohingya and other ethnic minorities following Myanmar State Counselor Aung San Suu Kyi’s arrival in the country for the enthronement of Japanese Emperor Naruhito.

Suu Kyi arrived in Tokyo on Oct. 20 on a visit that also included her giving a speech on Oct. 21 at a conference organized by the Japan External Trade Organization (JETRO) to promote investment and business opportunities in Myanmar.

Human Rights Watch said the organization should discourage any Japanese investment that would benefit the military or come at the expense of minority groups.

Phil Robertson, deputy Asia director at Human Rights Watch, said the Japanese government has been pitifully reluctant to speak out against abuses by Myanmar’s military, so officials should use Suu Kyi’s visit to raise these issues directly.

“Japan’s recent re-election to the U.N. Human Rights Council should encourage the government to improve its human rights foreign policy, including by calling on Japanese companies not to contribute to rights violations in Myanmar,” Robertson said in a statement on Oct. 20.

HRW said Japan has not tried to hold Myanmar accountable for abuses but instead has continued business as usual.

The United Nations' fact-finding mission on Myanmar in 2017 said he should be among those investigated for “genocide, crimes against humanity and war crimes.”

“Encouraging foreign investment while ignoring human rights will only embolden the Myanmar government and military to further whitewash the heinous acts committed against the Rohingya,” Robertson said.

“Not only have military commanders evaded justice for their widespread crimes but they have done so while sabotaging the country’s economic and democratic growth.”

Suu Kyi’s government and Myanmar’s military have come under intense pressure from the international community over reported atrocities against the Rohingya in Rakhine.

The U.N. fact-finding mission said there had been “genocidal acts” carried out in Rakhine by Myanmar’s military that also resulted in more than 740,000 Rohingya fleeing to Bangladesh.

Yanghee Lee, the U.N.'s special rapporteur on human rights in Myanmar, implored Suu Kyi in September “to open your eyes, listen, feel with your heart and please use your moral authority before it is too late.”

“I would like to ask the state counselor [Suu Kyi] if the Myanmar that exists today is what she had truly aspired to bring about throughout the decades of her relentless fight for a free and democratic Myanmar,” Lee told the Human Rights Council in Geneva on Sept. 17.