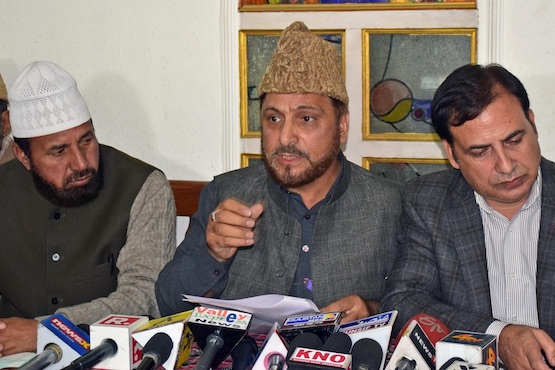 Kashmir's chief Islamic Jurist Mufti Nasirul Islam (center) along with other civil society and religious leaders addresses a press conference at his Srinagar residence Nov. 4. He demanded closure of all liquor shops in the state within three months. (Photo by Umer Asif)

Jammu-Srinagar Diocese has joined Islamic groups to demand a ban on alcohol in India's only Muslim-majority state of Jammu and Kashmir.

The state's chief Islamic jurist Mufti Nasirul Islam, along with prominent civil society activists, Nov. 4 called on the state government to ban liquor in the state within three months.

"If the government fails to meet this deadline, there will be large scale protests and agitation," Mufti said at the press meet.

Diocesan spokesperson Father Saiju Chacko told ucanews.com that local church people support the ban. They also want the government "to educate and make people aware of the hazardous effects of liquor consumption," said Father Chacko who added that alcohol has been breaking up families and making poor people poorer.

Their demand came after the government last week shelved a plan to set up a liquor shop at the state's main airport. The government withdrew the plan following widespread protests from Islamic parties.

Several Indian states have legally banned alcohol in the past but repealed it later. Prohibition now exists in only three states — Gujarat, Bihar and Nagaland. But prohibition without proper awareness programs and strict monitoring was not helpful in "eradicating the menace" because of rampant bootlegging, Father Chacko said.

Mirwaiz Umar Farooq, Kashmir's chief cleric, told ucanews.com that the government "should know that Kashmir is a Muslim-majority state and it should not take any decision that hurts the religious sentiments of Muslims."

Farooq argued that the attempt to open alcohol outlets was a part of a government attempt to "vandalize the society of Kashmir, which is based on the religious and ethical values" of Islam.

Jammu and Kashmir state has some 12.5 million people, 68 percent of whom are Muslims and 28 percent Hindus. Ban on alcohol sales threatens livelihood of thousands in Goa

Many Islamic groups have been spearheading an armed struggle to end Indian rule in the state or to join with neighboring Islamic Pakistan. They see alcohol consumption as anti-Islamic.

The region has been witnessing violence in the last 30 years. An estimated 100,000 people have died, including civilians, militants and army personnel after militant groups began an armed struggle for freedom from Indian rule in 1989. Since then Islamic militants banned cinema halls and set ablaze several liquor shops in the region.