Are the old elite moving to take back power? Journalists surround incumbent Jakarta governor, Basuki Tjahaja Purnama (center), after he voted at a polling station during the final-round of the Jakarta governor election in Jakarta on April 19, 2017. (Photo by Bay Ismoyo/AFP)

The defeat of Jakarta's governor in an election on April 19 after a campaign marred by taunts against his Christian religion and Chinese ethnicity has raised fears that primordial hatred is emerging again in Indonesia. Others suspect that a sentiment of secular distrust is being mobilized by figures from the old elite keen to take back power.

Incumbent Governor Basuki Tjahaja Ahok, commonly known as Ahok, was fighting to retain his post at the same time he was facing a trial for blasphemy over a comment in September 2016 in which he said people were using a verse of the Quran against him.

That verse, from Surat Al-Maidah, is interpreted by some as saying that Muslims should not be led by people of other religions.

The comment set off a storm of protest. Hard-liners staged mass protests at the end of last year demanding his arrest. Muslim preachers condemned anyone who supported the governor as a kafir (infidel). Some mosques refused to say prayers for dead supporters of Ahok.

On voting day, men in white Muslim skull caps were seen threatening ethnic-Chinese voters and telling them to go home without voting.

"How many thousands of votes were lost for Ahok that way?" said an eyewitness.

Ahok lost the election to Anies Baswedan (58 percent to 42), according to unofficial results. Baswedan, initially known as a moderate Muslim and rector of a progressive Islamic university, was minister for education and culture in President Joko Widodo's cabinet until he was sacked in July 2016. Reports said he had failed to follow the president's instruction to relieve poor families of school fees.

Baswedan openly courted the hard-line movement, although he insisted that the media had blown up a visit he made to the radical Islamic Defender's Front, which had been prominent in the demonstrations against Ahok last year.

"I made many visits to Christian and other groups too but the media wasn't interested in them," he said.

After his election was assured, he said that it was now time to heal the divisive wounds of the campaign. "Our first and main item on the agenda is to maintain the unity of Jakarta," he said. "We are committed to protecting diversity because Jakarta is possibly the most diverse city in Indonesia." 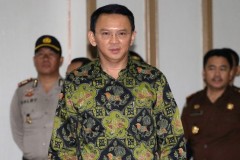 Ahok always faced an uphill battle to retain his position as governor. He was Widodo's running mate in the last Jakarta election in 2012. The public was impressed by the humble demeanor of the former mayor of the small city of Solo in Central Java. His habit of getting out and talking to ordinary people made him popular in a nation tired of elitist politicians.

Ahok became deputy governor and then automatically took over the leadership of the city when Widodo was catapulted into the presidency just two years later.

Even then, there were fiery protests outside City Hall from Islamic hotheads who said the city should not be led by a non-Muslim.

Known for his frank manner, disregard for the niceties of Indonesian society and determined to stamp out corruption, Ahok made many enemies, including among the business elite accustomed to being able to do deals under the table. His comments on Surat Al-Maidah gave his enemies in the hard-line movement the ammunition they were looking for.

His trial saw protests at every hearing but on April 20 prosecutors said they would not pursue the blasphemy charge and instead said they were demanding only a one-year suspended sentence for hate speech.

That enraged the hard-liners. Some Jakartans said they did not vote for him because they feared if he had been re-elected, the protests against him would have dragged on for the rest of his five-year term.

Still close to Widodo, Ahok is already talking about another job in government, possibly as head of the National Logistics Bureau, a critical post for maintaining food supplies and restricting the games of speculators used to making fortunes by hoarding food and selling it at high prices.

Widodo, keen as he is to stamp out rampant corruption, will need to think carefully about whether he should ally himself with Ahok again. He is facing re-election in 2019 and his enemies will be keen to use any weapon they can.

The hard-line groups, believing they have scored a major victory, will be keen to make further gains in their aim of pursuing the creation of an Islamic state, even if it would likely split Indonesia's multi-religious patchwork.

Evan Laksamana, a researcher at Jakarta's Center for Strategic and International Studies, said on Twitter: "My prediction: 2019 will be way uglier than 2014 or this election for sure because that is the lesson from this governor election."

Some believe Baswedan is merely a puppet for powerful forces who want to depose Widodo and restore the supremacy of an old guard of political and business interests. Immediately after the election result was clear, Prabowo Subianto, who lost the presidential election to Widodo in 2014 and still believes he can be the nation's leader, was the first to congratulate Baswedan, along with powerful business leaders Hary Tanoesoedibyo and Aburizal Bakrie.

The website Infoteratas.com featured photos of a victory dinner attended by many rich business leaders, many of them ethnic Chinese. Ordinary Muslims who were told their religion demanded they had to vote for Baswedan as the Muslim candidate were nowhere to be seen.

"Ordinary Muslims have always been tricked and fooled by the political and business elite," wrote Sumanto Al Qurtuby in an opinion piece. "The campaign for a Shariah Jakarta is just jargon, the Muslim for governor campaign is merely propaganda."

The Jakarta election appears to have been just the opening chapter of a struggle for power between Widodo and his push for clean government and the forces of old-style Indonesian politics.

Keith Loveard is a journalist who has covered Indonesia and Southeast Asia for many years. He is also the editor for information services at Concord Consulting.