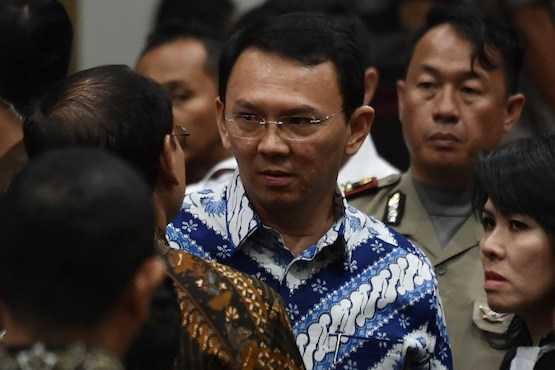 Jakarta's Christian governor Basuki Tjahaja Purnama (center), popularly known as Ahok, speaks to his lawyers after judges delivered their sentence during the verdict in his blasphemy trial in Jakarta on May 9. Ahok was jailed for two years after being found guilty of committing blasphemy, capping a saga seen as a test of religious tolerance in the world's most populous Muslim-majority nation. (Photo by Bay Ismoyo/AFP)

Outgoing Jakarta Governor Basuki Tjahaja Purnama has been sentenced to two years in prison after being found guilty of insulting the Quran by an Indonesian court.

A panel of five judges — four Muslims and a Hindu — led by Dwiarso Budi Santiarso at the North Jakarta District Court declared the Christian governor guilty of blasphemy on May 9 and ordered that he be jailed on the same day.

"The defendant, Basuki Tjahaja Purnama alias Ahok is proven guilty of committing blasphemy and I order that he be detained," Dwiarso said.

The verdict was more serve than the one-year suspended sentence the prosecutors were seeking. The charges were based on an incident in which Ahok, a famously feisty politician of Chinese descent, allegedly told voters not to rely on the Quran.

Immediately after the court verdict, Ahok was escorted to Cipinang penitentiary in East Jakarta.

I Wayan Sidarta, one of Ahok's lawyers, said that an appeal will be sent to a higher court within a week. "We cannot just accept the verdict," the lawyer said. He said the verdict was a result of extraordinary pressures from people who wanted Ahok jailed.

Prior to the verdict, a series of mass protests were held by hard-line Islamist groups.

Thousands walked from Istiqlal Mosque to the Attorney General's Office in Central Jakarta on May 5 demanding the heaviest sentence for Ahok. Ahok supporters near where the court hearing was held in South Jakarta on May 9. The banners read "People love Ahok" and "Ahok is not guilty."  (ucanews.com photo)

The verdict saddened thousands of Ahok's supporters gathered outside the court.

"It is unfair. He should be released," said Delly Rasuballa, a 55-year-old Protestant woman from North Maluku. "He is a good leader and does not deserve jail," she told ucanews.com

Andi Analta Amier, Ahok's adoptive Muslim brother, was very disappointed with the court. "The verdict is disheartening," he said. Amier's family has been beside Ahok since he began on trial in December 2016.

The Rev. Jeirry Sumampow, spokesperson of the Communion of Churches in Indonesia, said the verdict is "unbelievable' because it is completely different from the prosecutors' demand.

"It is strange to realize that on one hand the prosecutors did not have evidence on blasphemy charges, while on the other hand the judges said Ahok has committed blasphemy," he said.

"Such decision indicates that the judges were under pressure," he told ucanews.com, adding that it was politically motivated. "Their demand to imprison Ahok is achieved," the priest said.

Atty Lukman, a 60-year-old Muslim woman from South Jakarta said, "They should let him finish his term [as governor] which is only few months left."

Ahok's governor post will end in October when the newly elected governor Anies Baswedan, former education minister, is sworn in.

Pedri Kasman, secretary of Muhammadiyah's youth wing who was among 14 individuals filing the police report against Ahok, said he was satisfied with the court's ruling. Muhammadiyah is Indonesia's second largest socio-religious organization.

Kasman said the verdict was lighter than five years stipulated in Article 156(a) of the country's Criminal Code, but he said it was still "extraordinary."

"It is very progressive and good enough to meet the demand of all people who seek justice," Kasman told ucanews.com.

About 85 percent of Indonesia's population of 240 million are Muslims, of which majority are Sunni. In Jakarta province alone, Muslims comprise 8.2 million, while Protestants and Catholics comprise more than 720,000 and 303,000 respectively.