Sant’Egidio Community opens hearts and doors to those who fled conflict zones, regardless of faith Nimo, a 26-year-old Muslim woman from Somalia, joins a fast-breaking program held on May 25 by the Sant'Egidio Community in its home in central Jakarta, Indonesia. (Photo by Konradus Epa/ucanews.com).

Nimo, a 26-year-old Muslim woman from Somalia, had no choice but to flee the African country in 2016 during the civil war. Her goal was simple: stay alive unlike the rest of her family, most of whom had perished.

Since 2012, when a new internationally-backed government was installed, Somalia has been inching toward stability, but the new authorities still face a challenge from Al-Qaeda-aligned Al-Shabab insurgents.

She flew to Jakarta in Muslim-majority Indonesia with many other Somalis. "This is a country where refugees like me can feel safe," she said.

Nimo has stayed in a refugee shelter jointly managed by the Indonesian government and the United Nations High Commissioner for Refugees (UNHCR) in Pasar Minggu sub-district ever since.

About 400 other Muslim Somalis also live in refugee shelters in the capital.

Another African refugee named Nura, 19, also took refugee in Jakarta following a war in Ethiopia, on the Horn of Africa. She fled after her family members were killed in a border clash.

The war between Eritrea and Ethiopia began in May 1998 and left tens of thousands dead or injured in the space of just two years. Despite a peace deal signed in December 2000, the two sides remain on a war footing — their massive armies still facing off.

Nura has been staying at a refugee shelter also managed by the Indonesian government and the UNHCR in Tebet, another sub-district in the south of the capital, for the last five years.

These two women are among some 14,000 refugees registered with the UNHCR office in Indonesia. Of that total, 29 percent are children. 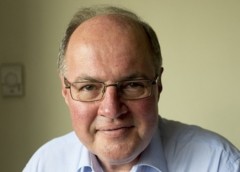 Muslim refugees pose with members of the Sant'Egidio Community during their fast-breaking program. (Photo by Konradus Epa/ucanews.com)

Even though Indonesia has not ratified the 1951 Refugee Convention, the country has a long tradition of hosting refugees and people in need of international protection.

In late 2016, however, President Joko Widodo signed the Presidential Regulation on the Handling of Refugees, which contains key definitions and sets out processes for the detection, shelter and safeguarding of refugees and asylum-seekers.

A bridge of solidarity

Such a situation makes things difficult for refugees, as they are not permitted by law to work in any capacity, earn money independently, or attend Indonesian schools. This has led to a state of communal lethargy.

The situation has encouraged the Sant'Egidio Community to pay serious attention to refugees, mostly Muslims.

The Catholic community has launched various programs, including regular visits and aid distribution, since March 2018 after a number of refugees were seen camping in makeshift tents of tarpaulin and bamboo outside an immigration detention center in Kalideres, another part of Jakarta.

In cooperation with Jakarta Archdiocese's Lembaga Daya Dharma, a social service institution, the community distributed hundreds of kilograms of rice and other basic necessities to the refugees that month.

"Refugees are a marginalized group. They are so helpless and have no access to various facilities they need," said community coordinator Eveline Winarko.

"Motivated by Pope Francis' call, we have committed to opening our hearts to refugees and lending them our support. We want to help them overcome the traumatic experiences they've faced so they can restore a sense of hope to their lives," she said.

In January 2018, Pope Francis issued a message for the 104th World Day of Migrants and Refugees. He called for solidarity with refugees by responding to the many challenges associated with contemporary migration.

The Sant'Egidio Community's programs are carried out once in a month. Sometimes, however, refugees visit the community's home in central Jakarta.

"We chat with them. We console them. This can help prevent them from feeling overwhelmed by stress," Winarko said.

"As one big family, we — that is, human beings — should work together to build a bridge of solidarity, instead of separating walls," she added.

This year, during the Islamic holy month of Ramadan, the community offered fast-breaking meals to about 60 Muslim refugees in central Jakarta.

"They are victims [of conflict]. We want to raise their spirits," said Tanny Tahir, a community member who organized the fast-breaking program.

Nimo described their services as a crucial lifeline.

"We need such support. Many of us are still traumatized having lost our families," she said, adding that her only wish was to go to Australia, a signatory country of the UN's convention, in search of a better life.