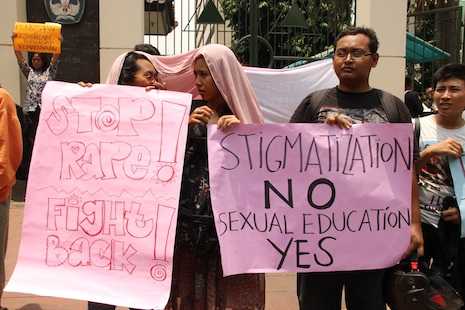 The National Commission on Violence against Women –Komnas Perempuan- has taken new steps to help ease the stigma of reporting sexual abuse by introducing a new online portal for direct complaints.

Commission head Yuniyanti Chuzaifah described it is a breakthrough that will enable victims, their relatives and the public to report instances of sexual violence.

She said it is a response to the findings of Komnas Perempuan and complaints from women advocacy groups, which have stated that many women were too scared or ashamed to file complaints about sexual violence against them.

“The website provides easy access for them to report their problems to us that can be further processed either through counseling or legal assistance,” Chuzaifah said at the launch of the portal today in the Jakarta governor’s office.

The website will be connected with call centers managed by the Jakarta administration, and any report filed will be directly sent to police, she added.

According to the commission’s report, sexual violence against Indonesian women remains high. In 2011 the group reported 4,377 cases of sexual violence, of which more than 50 percent were rape cases.

It reported a lower number last year – 2,521 cases – but Chuzaifah said there was probably more than that, but victims fear humiliation or public disgrace.

Chuzaifah said the new portal  would allow victims of sexual violence or their relatives to fill out an online form in which they could indicate the category of the case, location and email address, and any commission member could respond to them.

According to Andy Yentriani, head of the commission’s monitoring division, many cases were not reported because the majority of perpetrators of sexual violence are family members, such as the fathers, friends or coworkers of the victims.

Heni Hungan from the Volunteer Team for Humanity in Flores (TRUK-F), an advocacy group on violence against women, said the reluctance of women to report abuses is a problem that the group has faced for many years.

“We believe the portal will solve this problem, and we will promote it to society,” she told ucanews.com.

She said TRUK-F has handled more than 20 cases this year, all reported by the victims’ relatives, not the victims themselves.

“Hopefully with the presence of the website, victims of sexual violence will be open and share their stories,” she said, adding that she hoped that by victims filing complaints directly, sexual predators particularly in family circles would be discouraged from committing abuse.

Deputy Governor of Jakarta, Basuki Tjahja Purnama lauded the online breakthrough as it provides good information that hopefully would curb the number of cases of sexual violence against women.

“I think the website will be a comfortable place for women to unfold their stories,” he said. “Because when they experience violence they will need support. The presence of this space will help them gain strength out of their trauma.”

The launching of the portal, he said, is the beginning of cooperation between Komnas Perempuan and the Jakarta administration in accommodating people’s complaints on sexual violence.

The next step will be to integrate it with the government call center which is currently being prepared.