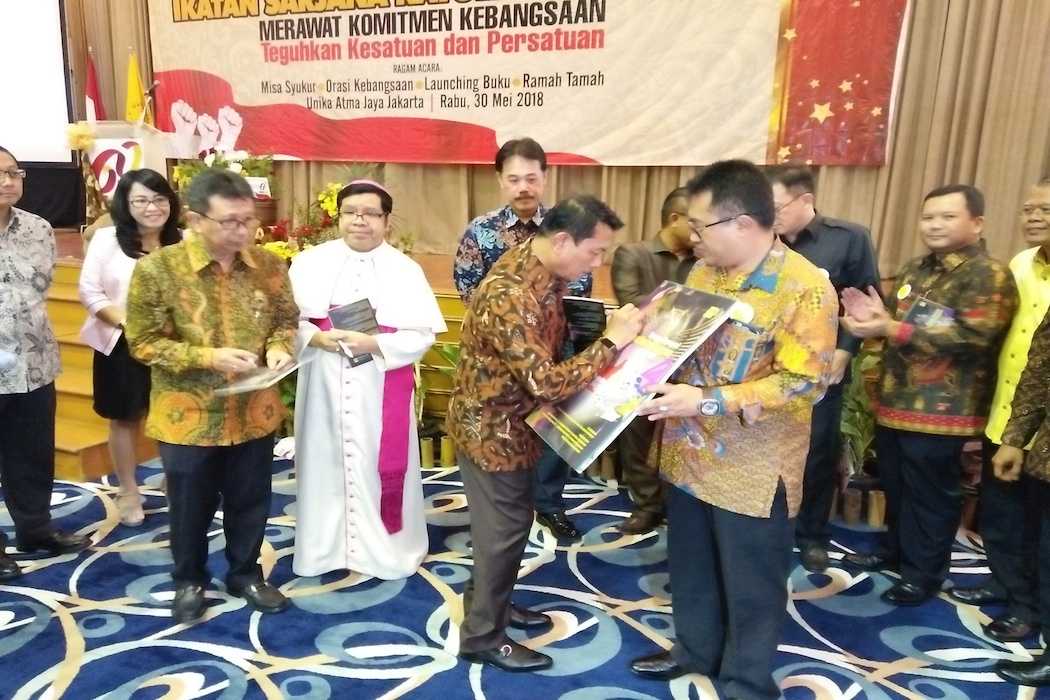 Presidential chief of staff, Moeldoko, signs a new book launched by ISKA during a program organized on May 30 in Jakarta, Indonesia to celebrate the group's 60th anniversary. He called on the Catholic intellectual association to use its influence to foster national unity amid increasing threats from radical groups. (Photo by Katharina R Lestari/ucanews.com)

A senior Indonesian government official has appealed to an influential Catholic organization to help foster national unity, amid what he said were growing threats to the country's secular constitution and philosophy by extremist groups.

Addressing a May 30 gathering to mark the 60th anniversary of the Association of Indonesian Catholic Intellectuals (ISKA), Moeldoko, the presidential chief of staff, said radical groups were trying to destroy the very foundations the country was built on.

He was speaking about Indonesia's 1945 constitution and its national philosophy, Pancasila, that promotes secularism and the principle of unity through diversity.

"What is happening scares me. I have just read [an] article about a young girl who became radicalized by learning about extreme Islamic teachings from the internet," Moeldoko, who like many Indonesians only goes by one name, told the gathering in Jakarta.

He was referring to 18-year-old Dita Siska Millenia, arrested on May 12 near a police detention center in Depok, West Java, and scene of a deadly riot by terrorism suspects three days earlier.

The girl was allegedly planning to stab a policeman with scissors.

"I hope the ISKA, as an organization with a strong commitment to promoting national unity, can really become this nation's pillar of strength to continue national development," he said.

"I hope ISKA will get rid of the terms 'majority' and 'minority.' We need to think about how to build togetherness. National unity is the only thing which can make Indonesia a big country," he said.

The ISKA is a member of Geneva-based Pax Romana ICMICA, a U.N. affiliated international association of Catholic organizations, groups and individuals primarily engaged in dialogue between the Christian faith and cultures.

As such it is heavily involved in the promotion of human rights and democracy, culture and education, social cohesion and eradication of poverty, and inter cultural and inter-religious dialogue.

ISKA chairman Vincentius Hargo Mandirahardjo said the organization has and always will be at the forefront in dealing with issues threatening national unity.

"We cannot stay silent when our nation is facing threats such as radicalism and fake news stoking religious sentiments. We are very concerned about this situation and will continue to be in the front line," he said.

"We need to voice our commitment over and over again. If we don't, then who else will?" he said, adding the government will have the organization's full support in this regard.

Father Paulus Christian Siswantoko, executive secretary of the bishops' Commission for Laity, said ISKA members have many thoughts and ideas they can share with others because of the influence and connections the organization has.

"It is hoped ISKA can really help people understand the current situation, to act wisely and to find solutions to issues such as radicalism and intolerance," he said.

Indonesia's National Counterterrorism Agency ran a survey last year and found that as many as 40 percent of students in 15 provinces in Indonesia were indicated as being of a radical mindset.