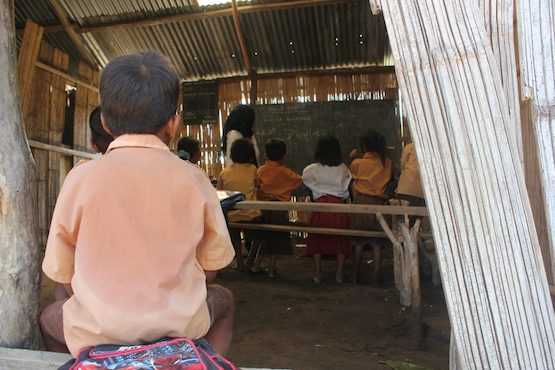 Children sit in a class at a state-run elementary school in Boleng, in East Nusa Tenggara province in Indonesia. The school building  is made of mud. (Photo supplied)

The Indonesian government has vowed to improve education quality in predominantly Christian East Nusa Tenggara province, whose students have lagged behind the rest of the country for many years.

As a first step, the government has set aside US$66 million for education in the province, a more than five fold increase on the US$10.9 million granted last year, Education and Culture Minister Muhadjir Effendy told ucanews.com on Jan. 16.

He said the money would also be used to improve teacher quality through training and workshops.

"We want education quality in East Nusa Tenggara at the same level as other provinces," he said.

The government move follows December protests by parents over the state of education in the province.

National exam results over many years have seen students in the province achieve way below the national average. Most senior high school students achieved marks of around 39 percent significantly lower than the 62 percent national average.

Many students leave school without proper qualifications and end up doing low paid jobs or look for work abroad exposing them to the dangers of human trafficking.

The province is a largely Christian area that is 54 percent Catholic.

Father Vinsensius Darmin Mbula, chairman of the National Council of Catholic Education welcomed the cash boost but warned against corruption.

"The province is not only known for low quality education, but also corruption," he said.

According to Indonesia Corruption Watch, East Nusa Tenggara is the second most corrupt province in the country after North Sumatra province.

Aside from building schools, facilities such as computers, libraries, electricity and the internet are also needed, the priest said.