Catholics hope Cardinal Suharyo will further the cause of interreligious tolerance in Indonesia. Cardinal Ignatius Suharyo Hardjoatmodjo of Jakarta has been named by Pope Francis as a new member of the Pontifical Council for Interreligious Dialogue. (Photo: Katharina R. Lestari/UCA News)

Catholics in Indonesia have welcomed the appointment of Cardinal Ignatius Suharyo Hardjoatmodjo of Jakarta as a new member of the Pontifical Council for Interreligious Dialogue.

Many of them stressed the need for him to promote tolerance in the multireligious country.

Cardinal Suharyo, also the chairman of the Indonesian Bishops’ Conference and an ordinary of the Military Ordinariate of Indonesia, was among more than 20 new Pontifical Council members announced by the Vatican on July 8.

Other appointees from Asia included Cardinal Luis Antonio Tagle, the Filipino prefect of the Congregation for the Evangelization of Peoples; Bishop Yoshinao Otsuka of Kyoto; Archbishop Felix Anthony Machado of Vasai and Bishop Raphy Manjaly of Allahabad, both in India.

The Pontifical Council is the central office for the promotion of interfaith dialogue in accordance with the spirit of the Second Vatican Council, particularly the Nostra aetate declaration.

It is responsible for promoting mutual understanding, respect and collaboration between Catholics and followers of other religious traditions, encouraging the study of religions, and promoting the formation of persons dedicated to dialogue.

Cardinal Suharyo, who turned 70 on July 9, could not be reached for comment.

“Let us pray that he will be able to create peace in the world,” he said, adding that the prelate was also named a member of the Vatican’s Congregation for the Evangelization of Peoples in January. 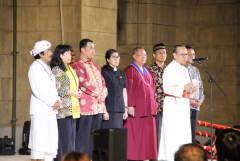 “Not only for Cardinal Suharyo but also for the entire Indonesian nation. It means that interreligious tolerance in Indonesia is good,” he told UCA News.

“Cardinal Suharyo is a humble person. I believe he will successfully promote interreligious dialogue, particularly in Indonesia.”

Eveline Winarko, coordinator of the Sant’Egidio Community in Indonesia, hoped Cardinal Suharyo will be able to reach out to more people from different religious background in the country.

“Let us show that the Catholic Church sees diversity as a richness instead of an issue. It is time for us to demonstrate our big role to maintain unity amid diversity,” she told UCA News.